December car sales are expected to fall nearly 6% compared to December of last year. That will not keep 2017 sales from being near record levels. However, a few car companies will take a real beating in the month, in particular Volkswagen, which owns the VW and Audi brands; Fiat Chrysler Automobiles N.V. (NYSE: FCAU), which owns the Jeep, Fiat, Chrysler, Dodge and Ram brands; and South Korea’s Hyundai/Kia.

According to one of the industry’s major research firms:

Edmunds, the leading car shopping and information platform, forecasts that 1,587,640 new cars and trucks will be sold in the U.S. in December, for an estimated seasonally adjusted annual rate (SAAR) of 17.7 million. This reflects a 14.0 percent increase in sales from November 2017, but a 5.8 percent decrease from December 2016, which was a record month for the industry.

But SAAR is an artificial industry number for the trends based of annual run rate derived from monthly calculation and projected for a full year. Edmunds expects actual sales for 2017 to be 17.2 million, which is close to a record, but still something of a drip. Jessica Caldwell, Edmunds executive director of industry analysis, said:

Sales are still strong historically, but 2017 will mark the first down year for the auto industry since 2009. With sales tapering off, we could be in for a high-stakes incentive war in 2018 as automakers and dealers fight for consumers in a smaller and highly saturated market.

The industry worry is that the slide will continue because so many people have cars bought within the past three years, which many consumers view as “new.” Alternatively, a recession has to come within the next year or two, based on normal economic cycles. If that happens, the car industry will not be able to dodge the consequences.

Among the slightly smaller manufacturers, Fiat Chrysler sales are expected to fall 8.2% to 176,641. The company’s sales have dropped for almost the entire year, based on the mix of vehicles that include unpopular sedans. Sales of Honda Motor Co. Ltd.’s (NYSE: HMC) cars and light trucks, including the Honda and Acura brands, are expected to fall 5.8% to 151,229. Nissan, which owns the Nissan and Infiniti brands, is expected to show a 5.4% drop in sales to 144,540 in December from the same month a year ago. Hyundai/Kia sales are expected to drop 11.3% to 103,473. VW/Audi sales, which have staged a comeback after the VW engine scandal, will drop 13.2% to 52,478.

No single car company will have a happy holiday, but for some, it will be a downright disaster. 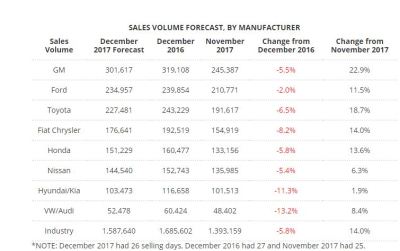