Can These Tools Really Help You Escape a Burning or Sinking Car?

Recent flooding events, with the promise of more to come as climate change-related weather events become more common, have meant and will mean that more people are likely to be surprised by rapidly rising water levels that could float even a heavy sport utility vehicle off the road and into deep water.

In 2017, more than 1,800 Americans died in nearly 21,000 crashes when their vehicles caught fire or were either partially or fully submerged. These kinds of accidents are always fatal if the occupants cannot escape the burning or sinking vehicle. Escaping generally means being able to cut a seat belt and to break a window to get out.

AAA evaluated six belt-cutting and window-breaking tools available for drivers to use to escape. Each tool is designed both to cut the belt and to break the window. One group included hammer-type tools with a cutting blade and the other group included spring-loaded devices that hook into the top of the side window frame and use a spring-powered cone to strike the glass.

The best performing tool for cutting seat belts was the spring-loaded device (at the far right in the following illustration), which took an average of 1.32 seconds to cut a seat belt. The tool on the left took 2.46 seconds, and the one in the center took 13.5 seconds.

The best performing hammer-type tool is at the far left of the tools in the next illustration, which took an average of just 1.51 seconds to cut the belt. The tool in the center took 2.00 seconds, and the one on the right took 23.06 seconds.

None of the tools tested could break through laminated glass, such as the front windshield of a car or other light vehicle. Four of the six tools successfully broke through tempered glass, the kind most often used in vehicle side windows.

None of the tools worked on laminated glass side windows either. John Nielsen, managing director of Automotive Engineering and Repair for AAA commented, “Our research found that generally vehicle escape tools can be effective in an emergency, but only if drivers know what type of side windows they have, otherwise they could waste precious seconds trying to break glass that will not shatter.”

A label stating the type of glass used in the side windows is often present in the bottom corner of the window. AAA provided this illustration of what a label looks like. Be sure to look at each window. The AAA report contains an appendix with a list of cars, crossovers, SUVs and pickups sold in the United States since 1970 that are equipped with laminated side windows.

Referring to the tool illustrations, only the hammer-style tool on the left was able to break a tempered glass side window. Neither of the other two could crack or break the glass after five blows. Of the spring-loaded tools, the ones on the left and in the center broke the tempered windows with from one to three blows. The one on the right failed to break a tempered window in one out of three trials. 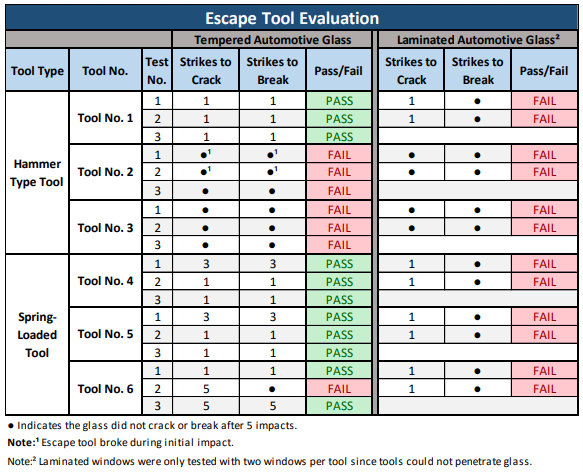 AAA recommends that drivers learn what kind of glass their vehicles’ windows are made of, keep an escape tool readily accessible, and plan what to do in the event of an emergency. The group also suggests a mnemonic S-U-R-E way to react if you get trapped in a vehicle:

Stay calm but work quickly to get everyone out

Unbuckle or cut seat belts and get everyone ready to leave

Roll down or break the windows, keeping two things in mind:

Exit the vehicle quickly and move to safety

The risk of dying from drowning in a flooded car is serious, but it doesn’t compare to the risks of those driving in some of history’s most dangerous cars. These are some of the deadliest cars in history.