Last Friday, Ark Investment Management analyst Tasha Keeney posted the hot investment firm’s three-year price target for electric vehicle maker Tesla Inc. (NASDAQ: TSLA). By 2025, Ark expects Tesla’s stock to rise by a factor of nearly five, from around $650 to $3,000. The firm’s previous price target for Tesla was a split-adjusted $1,400 by 2024. On a pre-split basis, Tesla stock would trade at $15,000 a share in 2025.

If Tesla meets Ark’s bull-case price target of $4,000 per share, the automaker’s market cap would rise from around $673 billion today to a whopping $4 trillion by 2025.

Keeney’s updated target is based on five key points:

Electric vehicle (EV) sales account for $367 billion of estimated 2025 revenues, and at an average selling price of $36,000, Tesla would have to sell around 10 million vehicles to reach that total. Ark’s bear case for unit sales assumes around 5.2 million vehicles sold.

Tesla CEO Elon Musk has said he expects Tesla deliveries to increase by 40% to 50% annually through 2030. That indicates current annual production of around 500,000 vehicles will grow to production of around 4 million vehicles by 2030. S&P Global Platt’s estimates that the total U.S. market for EVs in 2025 will be around 1.5 million units.

The second-largest component of Tesla’s bullish revenue stream, according to Ark, is a fully autonomous ride-hailing (robotaxi) service that is expected to generate some $327 billion in 2025’s bullish case. That service generates no revenue in the bear case. A human-driven service could generate $42 billion in the bear case.

That estimate for a robotaxi service accounting for nearly half of 2025 revenue is generating the most discussion about Ark’s price target. Keeney projects a 50% probability that Tesla will operate its own robotaxi fleet by 2025. Given consumers’ reluctance to ride in, much less own, a fully autonomous EV, that five-year timeline appears to be pretty aggressive.

Then there are federal and state regulators to get through. A five-year time frame to reach Ark’s high revenue estimate means that something would need to happen quickly, even as soon as the end of the year. Even Tesla can’t ramp revenue from $0 to $327 billion in a couple of years.

The following charts from Ark’s new report on Tesla show both the range of targets and the likelihood that they will materialize. 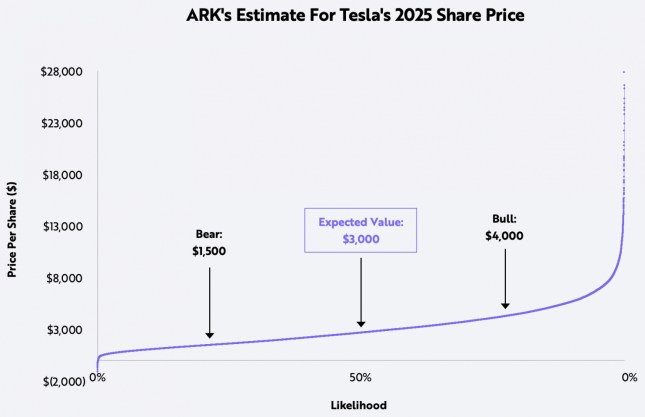 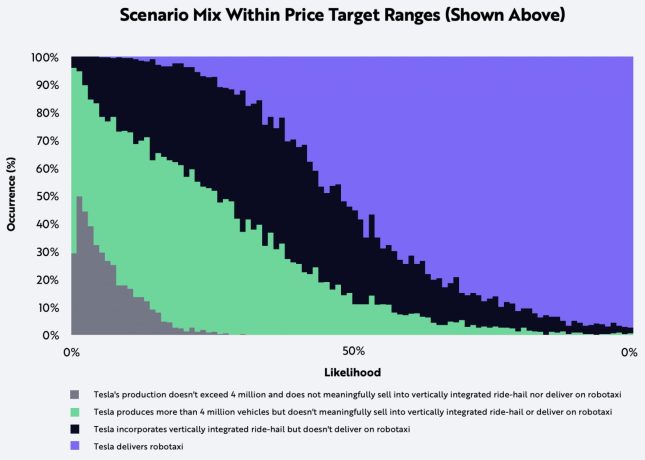