After U.S. equity markets closed Monday, Lordstown Motors Corp. (NASDAQ: RIDE) reported its first-quarter financial results. It was no surprise that the EV maker posted a loss, but the loss was about 2.6 times larger than expected. That might have been the good news.

The bad news is that the company said that production of its Endurance pickup would be limited and “at best be 50% of our prior expectations.” Capital spending is now forecast to total between $250 million and $275 million for the year, while operating expenses are tabbed at $55 million to $60 million and R&D costs are expected to total between $280 million and $290 million. That adds up to a range of $585 million to $625 million. As of March 31, Lordstown had cash on hand of $587 million.

The company also said it will “need additional capital to execute on our plans” but did not say how much. Lordstown said it has several opportunities to raise capital “in various forms and has begun those discussions.” In general, those opportunities are issuing more stock (common or preferred) or borrowing.

Last Thursday, California’s Air Resources Board (CARB) adopted a regulation requiring ridesharing companies like Uber and Lyft to begin electrifying their fleets in 2023 with the goal of meeting the state’s goal of reducing greenhouse gas emissions to 40% of 1990 levels by the end of the current decade. Ultimately, the state’s goal is to become carbon neutral by 2045.

Specifically, the new regulation “require[s] that rideshare companies achieve a level of zero greenhouse gas emissions and to ensure 90 percent of their vehicle miles are fully electric” by 2030. Both Uber and Lyft had already committed to the transition to zero-emission vehicles by 2030. Last September, Governor Gavin Newsom signed an executive order banning the sale in California of new internal combustion-engined vehicles in 2035.

A new electric bike was recently launched by a Denver company named Ristretto, after an espresso drink made with a finer grind of coffee and less water than a usual shot. This process tends to make the coffee less bitter but every bit as high octane.

The Ristretto 303 FS electric bike has the same goal for a different product. The e-bike looks more like a traditionally styled fat-tire bike, and, according to the company, has a range of up to 55 miles and a top speed of either 28 or 40 mph, depending on the rider’s choice of operating mode (class 2 or 3 or Race).

A special Founders Edition of 500 of the bikes was announced last week. Unlike many special editions, this one is priced 30% below the full retail price of $3,920 at $2,744. According to a report at Electrek, the e-bikes will begin shipping to customers in October.

Finally, Evannex has a story about the power of the two neural network arrays that are the brains behind Tesla Inc.’s (NASDAQ: TSLA) Autopilot and Full-Self Driving (FSD) features. The computing power required for Tesla’s camera-based Autopilot and FSD systems is massive. While using cameras was much cheaper than lidar just a couple of years ago, lidar has dropped sharply in price. Tesla CEO Elon Musk has said in the past that Tesla would not use lidar even if it were free.

Back in 2018, just after Tesla released version 9 of its Autopilot software, we noted a Tesla enthusiast who had figured out how much computing power the system required. Based on Evannex’s story, he wasn’t too far off.

Here’s a chart from Evannex comparing the power of the Tesla chips to other CPUs. 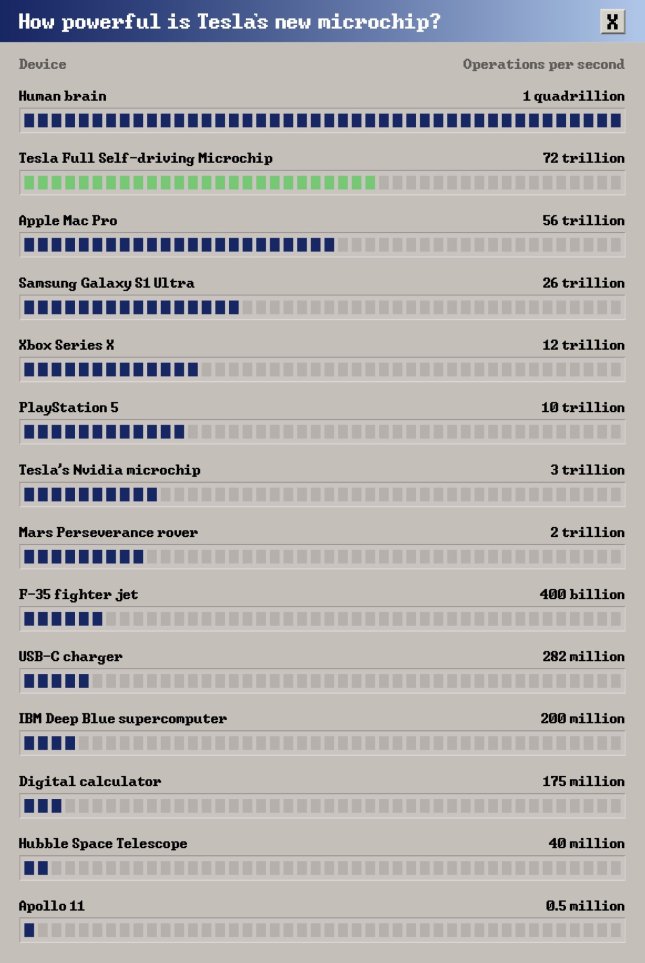