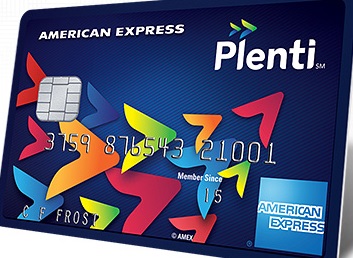 Source: American Express Co.
American Express Co. (NYSE: AXP) announced Monday morning that it is now offering a co-branded credit card with a new, U.S.-based “loyalty coalition” called Plenti. The new program, which is operated by American Express, “offers members numerous ways to earn points and save on things they already shop for everyday, regardless of the payment method used.”

The co-branded Amex card carries no annual fee and users do not even have to use the card to pay for the purchase in order to earn reward points. Here is what Plenti said in its press release:

Plenti members can use any form of payment that the partner accepts at checkout — cash, credit, debit or prepaid. This means that if they have a card product with other rewards benefits, they’ll earn those rewards in addition to the points collected through Plenti.

An Amex executive noted, “The Card is great for people who are loyal to Plenti partner stores and want the service and trusted security of American Express.” Current partners include AT&T, Exxon, Macy’s, Mobil, Nationwide, Rite Aid, Direct Energy, Enterprise Rent-A-Car and Hulu. Others are expected to be added over time.

ALSO READ: What Is the Right Age to Get a Credit Card?

This looks like a desperation move for American Express. The company is the worst performing Dow Jones Industrial Average stock for the year to date, down nearly 16%, and trails only the Dow’s two oil companies and Caterpillar as the worst performing stock over the past 12 months. The Dow trades near an annual and all-time high, while Amex languishes near a 52-week low.

The loss of Amex’s exclusive deal with Costco Wholesale Corp. (NASDAQ: COST), which accounted for about 8% of Amex’s global customer spending and 20% of worldwide loans, has to sting.

Unlike companies that are looking to expand into higher end products that attract a wealthier consumer, Amex has been trying to extend its brand by offering prepaid cards to less affluent consumers and has partnered with both McDonald’s and Wal-Mart in an effort to boost revenues.

But the new deal with Plenti seems to leave Amex with little to gain. No annual fee means that the company will have to persuade Plenti customers to use the card so the company can capture the swipe fees. That does not look like a new path to fame and fortune.

Still American Express has got to try anything and everything to regain its magic. Even though Warren Buffett still calls Amex a “very, very special company,” not all shareholders have Buffett’s patience or his track record with the company. According to a report at Bloomberg, Buffett paid about $1.3 billion for his stake in American Express, a stake now worth north of $11 billion.

ALSO READ: Banks and States With the Most Branch Closings: The Rise of Mobile Banking