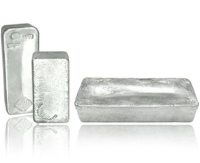 As the politicians in America play chicken with our prized Triple-A debt rating and as Europe is succumbing to its PIIGS, gold has eclipsed $1600 per ounce and now it has helped to pull silver back above that magical $40.00 mark.  Maybe this time is different, but the massive run the last time felt like it took mere days (or hours) for silver to run up to $48 from under $35… That was from mid-March to late-April.  Then the bubble popped and all the silver bugs were handed their costly bill for dabbling in the market at the peak.  Silver’s rise above $40 again begs us to ask, “Is the Devil’s metal just bringing a new chance for investors to get burned?”

ProShares UltraShort Silver (NYSE: ZSL) is getting crushed as it is the double-short play for silver.  Its 6.4% drop today to $13.31 compares to a price of nearly $18.00 early last week.  To show just how volatile, and deadly, this one is… Its 52-week high is $145.68.  If silver rallies again through the roof and stays there, a reverse split of this exchange-traded product is likely.

Again, maybe this time really is different.  Things are definitely more tense today than they were from March to the end of April.  The problem is that we have been here before with prices rising rapidly in gold and in silver. We have also seen this game played out in the energy patch from 2007 to 2008 when the price rose every day for effectively the same reasoning.  If silver takes on the extreme portion of gold’s rise and takes out new highs, then it may be the public’s last real asset grab for items that can be easily used for money and hold its value better than paper money.

Anything is possible, but it is at least worth asking just how different this time is for the Devil’s metal.  Silver is a very small market for the amount of dollars that can be steered its way in a hurry.  If you walk in one day soon and find that the margin for buying silver or gold has been raised again, don’t be shocked.