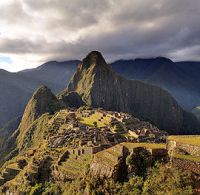 Peru was recently listed as one of the few nations which could actually face a ratings upgrade in 2012.  Not all nations are being downgraded.  Recent news of a new trade pact with Russia may be just one more catalyst that helps to drive the rating of the nation of Peru higher.

The nation has an estimated 29.2 million people and 2010 Gross Domestic Product was listed as $275.7 billion on a purchasing parity calculation.  Moody’s currently has a “Baa3” rating, the lowest of all investment-grade ratings, but it has a “Positive” outlook.  S&P rates Peru as “BBB” as invest-ment grade but slightly better than the lowest investment-grade by rival ratings agency Moody’s, and it has been that way since August of 2011.

While trade deals and ratings agencies do not immediately impact many investors’ decisions, this is another positive for iShares MSCI All Peru Capped Index (NYSE: EPU) and its ADR members in weighting: Credicorp Ltd. (NYSE: BAP) in financial services; Compania Mina Buenaventura, S.A. (NYSE: BVN) in precious metals; and Southern Copper Corporation (NYSE: SCCO), based in Phoenix, Arizona, with a $24 billion value for its mining, exploring, smelting, and refining copper ores in Peru, Mexico, and Chile.

Read Also: Nations Expected to See Their Ratings Raised in 2012

What is interesting is that Russia was also on the list of companies which may face ratings upgrades in 2012 and that was before the official entrance into the World Trade Organization.  Peru is often overlooked by U.S. investors, but the ETF above and the three stocks there tend to make investing in the mountainous nation much easier than many international investors might think.

Peru’s most recent growth was called up at 5.1% GDP, which was higher than most nations and was actually considered a disappointment due to a weaker manufacturing climate which was boosted by private consumption and public spending.  There is some economic stimulus in place and some investors may consider Peru’s stock market cheap.  The iShares MSCI All Peru Capped Index (NYSE: EPU) was down more than 30% in 2011 as of late-September and early-October but shares have rebounded from about $34 to over $38 since then.

The latest news is that Peru will begin deeper discussions with Russia over a free trade pact in 2012.  A Peruvian trade minister was quoted noting that Russia offers many export possibilities for Peru and the government data showed bilateral Peru-Russia trade being worth some $214 million (in converted dollar terms) in 2010.

Will this overtake the free trade pacts in place with the United States or with China?  Unlikely.  Still, this is yet one more tailwind that could help steer Peru forward and deeper into investment grade by the ratings agencies along with expected trade pacts coming from Japan and the European Union in 2012.

And as far as the stocks noted, here is the discount that these are trading at to 2011 highs: