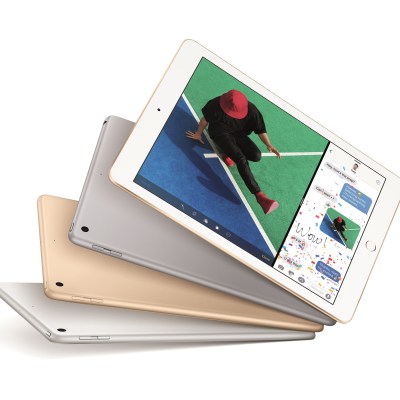 Source: courtesy of Apple Inc.
Global shipments of tablet devices fell by 8.5% year over year in the first quarter of 2017. That marks the tenth consecutive quarter where year-over-year shipments have declined. Worse, in the most recent five quarters, the declines have sunk into the double digits.

The data were reported on Thursday by IDC, which splits the tablet market into two categories: slate devices such as the iPad from Apple Inc. (NASDAQ: AAPL) and detachable keyboard devices like the Microsoft Corp. (NASDAQ: MSFT) Surface.

The bad news for Apple is that shipments of slate tablets peaked in 2014 and are now in “steep decline.” Demand for detachable keyboard devices continues to rise, which is good news for Microsoft.

As far as most are aware, the tablet market was created in 2010 with the launch of the original iPad, despite unsuccessful product attempts by other OEMs in the years leading up to this. The rate at which the tablet market grew from 2010 to 2013 was unlike many other consumer-oriented device markets we’ve seen before. However, it appears for many reasons consumers became less eager to refresh these devices, or in some instances purchase them at all. We continue to believe the leading driver for this was the increased dependency on smartphones, along with rather minimal technology and form factor progression.

To date, detachable shipments have dwarfed those of convertibles, but growth of the former has slowed a bit. In IDC’s 2017 U.S. Consumer PCD Survey, fielded over the previous two months, detachable owners held slightly more favorable attitudes towards their detachables than convertible owners did for their convertibles. However, owners of both were far more likely to recommend a convertible over a detachable.

Here are the top five tablet vendors ranked by first-quarter 2017 shipments and their year-over-year shipment growth in the quarter:

Apple is expected to launch a refreshed iPad line soon and Microsoft, which is included in the “Other” category in the IDC survey, should be coming out with a new version of the Surface later this year.