Makers of traditional PCs, which have been buffeted by smartphones and tablets, face flat sales worldwide in 2018. One company will best the major competitors in the industry.

HP Inc. (NYSE: HPQ) is expected to lead the world in market share this year.

According to tech research firm IDC:

Among the primary reasons the numbers are not deteriorating are upgrades, mostly by corporations, and more adoption of Microsoft’s latest operating system, Windows 10, IDC reported.

HP Inc. maintained a comfortable lead over all others in the market with its eighth consecutive quarter of overall growth (up 4.3% year on year) and growth in all regions except Latin America.

Lenovo saw a flat quarter in 1Q18, the third consecutive quarter in which the company saw year-on-year volume stabilize with flat global growth and a slower pace of decline in the U.S.

Dell Inc. posted the strongest year-on-year growth out of all the major companies, growing 6.4% and buoyed by strong performances in nearly every region.

Acer held onto the fourth position. Its ongoing expansion into gaming and continued investments in Chromebooks have paid dividends for the company, but also caused some tough going in other arenas.

Apple finished the quarter in the fifth position with a year-on-year decline in shipments of 4.8%.

Apple Mac sales have not been impressive for some time as the company has rotated its efforts to the iPhone, software and media. 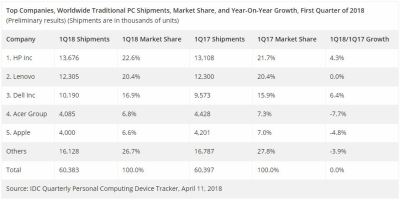