Are baseball cards a hobby or an investment? The answer to this depends on whom you ask, but so does the actual card being purchased. While samples of the T206 Honus Wagner have previously held the record for multimillion-dollar purchases, the sports collectibles industry just saw a record-breaking sale that has shattered all prior records and then some.

Goldin Auctions’ 2020 Elite Auction brought in over $14 million in total sales. The record-breaker was oddly enough not a vintage card from a find or hidden away in a collection for decades. The new record for a single-card sale belongs to a 2009 Bowman Chrome Draft Prospects Mike Trout Superfractor signed rookie card. While this is a modern era card that generally sees a flood of supply, this card is unique as serial number “1 of 1.”

According to a statement from Golden Auctions, the sale price of $3.936 million broke the prior single-card record price of $3.12 million. That prior record was also from Goldin Auctions and was back in 2016 for the famed 1909 Honus Wagner T-206 card.

While fetching even tens of thousands of dollars for a modern-era card may not be the norm, it is becoming more and more common that modern-era cards are fetching previously unimaginable prices. A 2003/04 UD “Exquisite Collection” Rookie Patch Autograph LeBron James card sold for $1.107 million in this same auction as well. According to the Golden Auction statement, this marked the first time where there were 2 million-plus dollar items sold in the company’s same auction.

While the $3.936 million price tag sounds unreal, this card was an investment held by a sports betting consultant. A release from Anderson Group Public Relations noted that Dave Oancea is the man behind this new record-breaking single sports card sale. The PR agency noted that Oancea purchased this same Mike Trout “1 of 1” card back in 2018 on eBay. The purchase price was $400,000 at that time, from a seller based in Taiwan.

While this price may sound like a once-in-a-life event, Oancea also recently sold another Trout autographed rookie card for a sum of $922,500 earlier this same year. That sale was also through Goldin Auction.

When it comes to vintage cards, there are very rarely the “mint condition” cards. This new record-breaking Trout card had been graded by Beckett Grading Service as a “Mint 9” and with a certified autograph issue logo on the card.

Vintage sports cards and memorabilia have been the go-to record-breakers for decades. Cards of Honus Wagner, Babe Ruth, Ty Cobb and high-grade rookies of Mickey Mantle, Hank Aaron, Roberto Clemente, Willie Mays and so on have commanded incredible prices. Now it is the modern-era cards taking center stage.

With record-breaking baseball card prices in the modern era, are we witnessing the same sort of bubble that was seen back in the 1980s and early 1990s?

Time will tell whether investing in sports cards and memorabilia has entered into a new bubble, but personal experience in vintage card auctions and observing auctions of modern and vintage sports has shown that the overall impact of the COVID-19 recession showed only a minimal or zero impact even shortly after the panic selling in the stock market was reflecting a crashing economy.

Rich Mueller of Sports Collectors Daily just wrote some key observations after this record-breaking auction. One of the views noted that there is now more money flowing into the hobby than ever. Another observation is that some of the new buyers are professionals looking for an ultimate flip rather than traditional collectors. One of Mueller’s observations: “In some way, it’s really not all that different than what we now call the junk wax era of the late 80s and early 90s when speculation on current players ruled.” That said, Mueller also noted how some people believe that the sports card market is still a baby and that people have thought the price growth was unsustainable for the past 30 years or so.

One additional driver of what might seem to be whacky valuations in sports cards may be athletes themselves. Hockey great Wayne Gretzky was the prior owner of one of the T206 Honus Wagners now known as the “Gretzky Wagner.” In 2018, Former Bengals lineman Evan Mathis sold a 1952 Mickey Mantle Topps rookie card for a near-record $2.88 million through Heritage Auctions in order to pay for his dream home.

24/7 Wall St. has also counted sports cards as an alternative investment class on its own as a way of avoiding traditional losses from the stock market. To back that up, one of the prior “T206 Honus Wagner” cards sold by Goldin Auctions was said to be from a wealthy investor who had never purchased a baseball card for an investment before.

Brent Huigens, CEO of the PWCC Marketplace, has also confirmed that new investment is coming from just about every angle — increasingly passionate hobbyists, traditional investors, online gamblers, competitive fantasy sports enthusiasts, athletes, celebrities, and so on. Huigens has also said that the (sports cards) space is fun and liquid, with great access to data and rational investment strategies (similar to the stock market).

Whether this is a bubble in sports cards and memorabilia remains to be seen. That said, it is now easier than ever for the public to say, “I own many cards worth more than their weight in gold!” 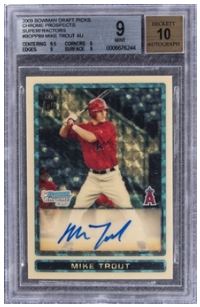 Source: Golden Auctions
The MLB website shows that Trout has a lifetime average of .304, and that is nowhere near a career record in the MLB. That said, many modern-day baseball fans consider Trout to be the greatest or among the greatest existing all-around players today. To prove the point, Trout’s contract extension from 2019 with the Angels was for the sum of $426.5 million through 2030.

Here is another statistic to consider about this record-breaking sale for Trout’s record-selling baseball card. The Baseball Reference website lists Trout’s weight at 235 pounds, and that $3.9 million or so sum is worth more than half of his body weight in gold ($7.52 million at $2,000 per ounce).

ALSO READ: 5 Blue Chip Stocks to Buy Now That Pay a 6% or Higher Dividend
Get Our Free Investment Newsletter