The world of vintage sports collecting has evolved from a cottage hobby to big money, make that serious money, over the years. Whether it’s Honus Wagner baseball cards, certain game-worn uniforms and sports equipment, and even contracts and other sports memorabilia — the prices some sports collectibles have started fetching in recent years has begun to rival the fine arts market in some instances.

If there is one baseball player after the first initial 5 members of the Hall of Fame who changed the face of baseball in the twentieth century, it has to be Jackie Robinson. Robinson was the first major league baseball player to break the color barrier in the 1940s, and his number 42 is the only number which is a retired number for team players for every MLB baseball team.

Now there is a new lot coming up for auction that looks set to break any single baseball and other sports collectible auction record. This is a two-item auction of Jackie Robinson’s original professional baseball contracts with the Brooklyn Dodgers and with the Montreal Royals. The opening bid is $5 million for the pair being sold in a single lot.

The first contract was signed by Jackie Robinson on October 23, 1945, with the Montreal Royals. And the second contract with the Brooklyn Dodgers was signed on April 11, 1947. Both contracts were authenticated by James Spence Authentication (JSA), Beckett Authentication Services and John Reznikoff of University Archives.

These two famous contracts had been held in a Brooklyn historian’s safe-deposit box until only a few years ago. A note from the Jackie Robinson Foundation showed that these contracts have been on public display at several museums and major-league stadiums over the last three years. Those locations included the National Constitution Center in Philadelphia, City Hall in Montreal, Times Square in New York City, Busch Stadium, Wrigley Field, and others.

Goldin Auctions has the listing, and the auction will begin online on January 21, 2019 (which is also Martin Luther King Jr. Day) and will end during a live event in New York City on January 31. While January 31 may not be a special date to many people, that would have also marked the 100th anniversary of Robinson’s birth.

It is hard to know just how much this lot will actually sell for. A starting price of $5 million is one thing, but the two contracts were said to have been appraised for a combined $36 million by rare document expert Seth Kaller. The documents were also said to be currently insured and appraised by Chubb for $36 million. The release from Goldin Auctions said that Mr. Kaller has appraised many other comparable historical items. These included Abraham Lincoln signed copies of the Emancipation Proclamation and Benjamin Franklin signed copies of the U.S. Constitution.

According to the auction’s announcement, 10% of the purchase price from this auction will be donated to the Jackie Robinson Foundation. Ken Goldin, chairman of Goldin Auctions, said:

There are many documents on display in museums that represent seminal moments in history which forever changed America, such as the Declaration of Independence, the Gettysburg Address and the Emancipation Proclamation. But most historians believe the integration of baseball with the signing of Jackie Robinson had as great an impact on America as any other moment in history. In fact, Martin Luther King called Robinson the founder of the Civil Rights movement… We encourage philanthropists, museum curators, MLB team owners, corporations and anyone else with the means who loves baseball or supports the civil rights movement or wants to help preserve Jackie’s legacy, to step forward and take ownership of these historic documents.

While this opening bid and the amount the documents are insured for may sound astronomical, certain unique items in sports collectibles have generated more than $1 million price tags. Goldin Auctions fetched a record-breaking price for a T206 baseball card of Honus Wagner dubbed the “Jumbo Wagner” for over $3.1 million, beating out a prior record for another T206 Honus Wagner card dubbed the “Gretzky Wagner” (for hockey great Wayne Gretzky) for $2.8 million a decade earlier.

We reached out for an answer on the highest baseball items that have ever sold. Ken Goldin of Goldin Auctions responded to an inquiry to confirm what the most expensive Jackie Robinson item for sports memorabilia was a 1947 Brooklyn Dodgers jersey which sold for $2.6 million in 2018.

It is no secret that vintage and unique sports collectibles can fetch astronomical prices these days. This auction looks ready to shatter any prior records by miles as it is likely to attract bidders who are not even traditional sports collectors at all.

An image of the Brooklyn Dodgers contract is shown below. 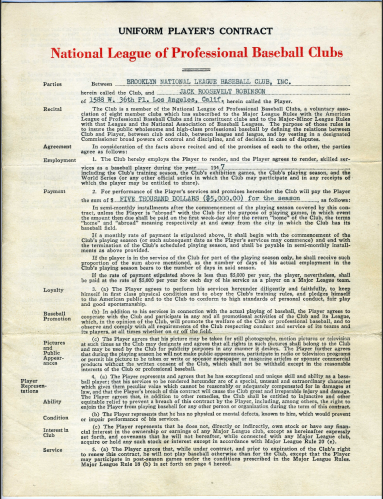