It may seem amazing to most people that the stock market has managed to hit all-time highs during a pandemic and a bad recession. What has been equally amazing is that baseball cards and sports collectibles have continued to see their prices surge for the most sought-after items, as this has moved from just a hobby into a big business that now includes wealthy athletes, celebrities and investors driving prices higher and higher. The world of luxury goods, from art, vintage autos and other rarities, is growing.

This article has been updated to reflect the sale price.

The sports collectibles world saw a shocking record-breaker when a unique sample of a Mike Trout rookie card sold for nearly $4 million, but the hobby is still fixated on the records set by the infamous T206 Honus Wagner. There was a new record set for a Honus Wagner auction for this grade.

With a known universe that has been estimated to have less than 60 samples graded by all grading companies, the PSA service has 33 graded normally and two graded with qualifications. As for the PSA 1 grade, there are 10 samples of the card with that same grade. PSA’s SMR price guide estimates that a PSA 1 sample of Honus Wagner is worth $550,000, but that is about to be worth more.


The Mile High Card Company auction was set to end on the evening of September 3, 2020 but did not end until the early morning hours of September 4 due to extended bidding rules. This T206 Honus Wagner sample was given a $200,000 minimum bid, but there have so far been 22 bids and the winning bid as of 11:00 am Eastern Time (on September 3) was $755,000 after 22 bids were in at that time.

The website VintageCardPrices.com has only four of the same PSA 1 sales seen back to 2005. These cards were issued by the American Tobacco Company in 1909 to 1911, and the Wagner samples are all under the Piedmont and Sweet Caporal brands of that long-gone era. The most recent price for PSA 1 sample of the T206 Honus Wagner card was $402,900, sold through Robert Edwards Auctions back in 2013, with two prior sales of $282,000 and $399,500 before then.

The fascination with this card has been endless. While there are countless numbers of total T206 cards in existence, the Honus Wagner cards are extremely rare. Two theories for the scarcity have prevailed.

The first theory had been that Honus Wagner was anti-tobacco and did not want his image to be used in a manner that would entice kids to smoke. There are other tobacco cards of Honus Wagner besides the famed T206 set.

The other theory, which is the more predominant among sports collectible industry leaders, points more toward a contract dispute. It seems that the American Tobacco Company did not want to pay Wagner what he thought he should be paid for his image.

Vintage and rare collectibles have gone far beyond boys and young men just buying packs of baseball cards to open up and then collect. It’s now a big business, and hearing about sales in the hundreds of thousands or over $1 million are becoming more common each month, it seems.

Investors and speculators have come into the hobby. The site Rally Road recently had an authentic but altered sample of the T206 Wagner card sell in factional shares for the card. The price of that sale, for a trimmed and shellacked card graded solely as “Authentic” by the SGC grading service, was $100 per share, with a value of approximately $500,000.

It also appears that celebrities and athletes themselves are behind the drive higher in baseball card prices. Rich Mueller of Sports Collectors Daily has written that more money is flowing into the hobby now than ever. Brent Huigens, CEO of the PWCC Marketplace, also has confirmed that new investment into cards is coming from just about every angle beyond passionate hobbyists: traditional investors, online gamblers, competitive fantasy sports enthusiasts, athletes, celebrities and so on. Huigens also noted that the liquidity in sports cards now comes with great access to data and rational investment strategies, similar to the stock market.

24/7 Wall St. has counted sports cards as an alternative investment class on its own as a way of avoiding traditional losses from the stock market. To back that up, one of the prior T206 Honus Wagner cards sold by Goldin Auctions was said to be from a wealthy investor who had never purchased a baseball card for an investment before.

The S&P 500 and the Nasdaq hit new all-time highs again just a day before the Wagner auction was set to close. Maybe a new record-breaking price for a Honus Wagner card that is graded so low doesn’t so mismatch against reality after all.

An image of the current PSA 1 T206 Honus Wagner below is from the Mile High Card Company auction site. 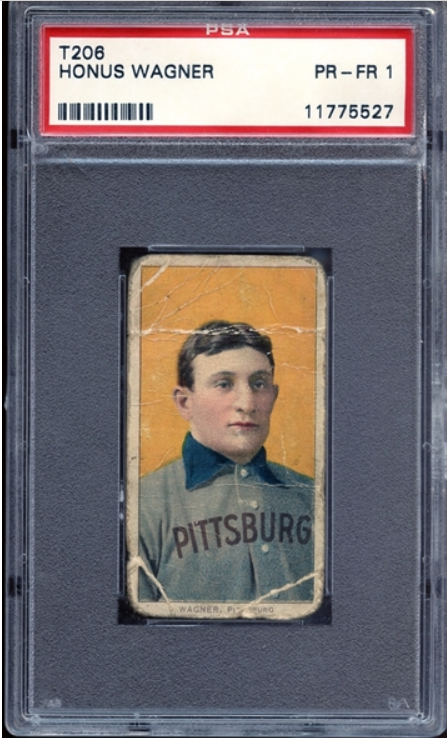