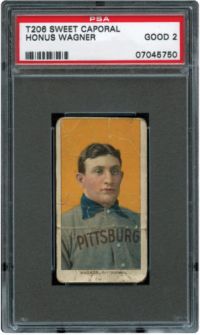 Almost all investments rise and fall in price through time, and the same is true over the value of sports collectibles and baseball cards.  The ‘investing’ rule in sports collectibles that has been true through good times and bad times is fairly simple: vintage collectibles of high quality tend to dominate over the mass-produced items from the 1980s all the way up to modern day.  Almost everyone has heard of the great baseball players of the game such as Babe Ruth, Lou Gehrig, Ty Cobb, Mickey Mantle, and Hank Aaron.  Very few people know much about Honus Wagner as a baseball player.  The difference is that most collectors (and collectible investors) know one thing for sure… The T206 Honus Wagner is the most desired sports collectible that exists.

January 2012 is the first time in memory that two different samples of the T206 Wagner card have been for sale in the same month.  If you have nearly unlimited means, a T206 Wagner can end up in your collection right now.  Another T206 Wagner just sold in early January.

Published reports indicate that there may be 50 to 100 samples of the T206 Honus Wagner that exist, but there may only be around 50 in existence after speaking with industry sources.  A sale of $2.8 million for the “Wayne Gretzky” T206 Honus Wagner in 2007 set a record, and that was after the exact same card had been bought for about $2.35 million earlier that same year.

The reason this card is so rare is known as Honus Wagner decided to have the American Tobacco Company withdraw his card from the T206 series.  The “why” this card is so rare remains a debate even today.  Only a limited number of this card made it out into the public, or at least only a few which are known to have survived.  In the late 1800s and early 1900s, baseball cards were promotional inserts for cigarettes packs and tobacco packages, as well as made for other products.  They were far from being kids’ bubble gum cards that later generations would come to cherish.

The most common belief is that Wagner was anti-tobacco and did not want his image promoting cigarettes and tobacco products to children.  Maybe, but Maybe not.  This may have simply been a contract dispute over compensation or terms.  Here is the argument for the latter case… Honus Wagner’s image appeared on cigar boxes in some of the same years around the debated time of 1909 to 1911 when the T206 cards were distributed.  Robert Edwards Auctions has auctioned two such cigar boxes in recent years, and the Baseball Almanac shows these images as well.

While most baseball cards rise and fall in value and can be very cyclical, that just has not been the case for a T206 Honus Wagner.  As it turns out, there are millions of people who collect baseball cards and memorabilia or who have collected in their lives.  The Wall Street Journal reported in mid-2011 that there were 3.1 million millionaires in 2010.  And the same report showed over 40,000 in North America worth $30 million or more.  Some of these people are still collectors and there is no greater prize in sports collecting than being able to flaunt a T206 Wagner.

It was not very well covered in the media, but a T206 Honus Wagner from the famed Dreier collection just sold in early January 2012 through Legendary Auctions.  It was graded by PSA, one of the industry-recognized grading services and the grading brand of Collectors Universe, Inc. (NASDAQ: CLCT).  It was graded as a “4” (on a scale of 1 to 10).  This famed T206 Wagner sold for an undisclosed sum.  After speaking with Doug Allen of Legendary, it was a privately negotiated transaction.  Mr. Allen would not disclose the buyer nor could we get an exact price, but he quoted, “The sale was for more than $1.5 million.”  An incredible sum indeed.

Now there is another sample of the card for sale right now, for a hefty price.  Memory Lane has a “PSA 2” graded T206 Wagner for sale today for a whopping $775,000.00.  It is even advertised on eBay Inc. (NASDAQ: EBAY) as item #290661465614.  After speaking with J. P. Cohen of Memory Lane, this is card is on consignment and had previously been for sale at a higher price and the new price is said to be close to where offers came in for this exact card last year.

These two samples are not the only T206 Honus Wagner cards which have been sold in recent times.  A unique sample was a proof strip from the T206 set which actually belonged to Honus Wagner himself.  This was purchased at the Major League Baseball All-Star Auction by SCP Auctions (for an anonymous client) for the sum of $316,250 in 2010.  It was also SCP Auctions Inc. which brokered the record $2.8 million sale mentioned earlier of the prized Gretzky T206 Wagner.