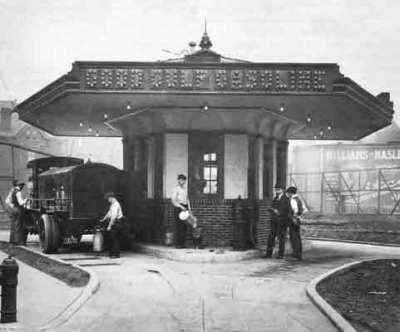 Source: Bob Beck/Gulf Oil Historical Society
Since Gulf Oil Company opened the first gas station in Pittsburgh in 1913, things have changed a little. Like the price of gasoline — $0.30 a gallon then, compared with a national average of around $3.67 now. Don’t wish for the good old days, though, because that 30 cents is equivalent to $7.18 in purchasing power today. Adjusting for inflation, gasoline is half its price of 102 years ago.

And there’s more than one gas station in the United States as well. According to the U.S. Census Bureau, there were 114,533 gas stations in the U.S. at the end of 2012, the last year for which data is available.

The actual number of gas stations in the United States is a little difficult to pin down. According to the National Association of Convenience Stores (NACS), of the country’s 151,282 convenience stores at the end of 2013, 121,658 sell fuel, a year-over-year increase of 2.7%. National Petroleum News (NPN), a trade publication, put the number of gas stations at 157,393 in 2011.

According to a survey of its readers published last October, NPN reported that 75% of retailers pump between 500,000 and 2 million gallons of motor fuels a year. The most common number of pumps at a gas station is eight, and the retailers’ biggest concern is credit/debit card fees.

The average gross margin on a gallon of fuel is $0.12, according to NPN, and net profit per gallon averages $0.07. That means that if a gas station owner pumps 1 million gallons of fuel in a year, his net profit is $70,000. Not bad, but not great either. And that is where the convenience stores enter the picture.

ALSO READ: The 10 Cities Where No One Wants to Drive

The NACS found that convenience stores sold 80% of all U.S. motor fuel in 2010, which accounted for about two-thirds of total convenience store sales. The other one-third of sales is down to tobacco, beverages and other items. And while the revenue total from these items may be relatively small, this is where the profits are. Fuels sales account for about a third of profits while merchandise sales account for the rest.

Americans are driving less and buying less fuel for their newer, more fuel-efficient vehicles. Americans who live in larger U.S. cities with good public transportation are less likely to have a car than they were five years ago. In New York City, for example, more than half of the residents do not own a car.