US Teachers State Pensions Near $500 Billion in Unfunded Liabilities 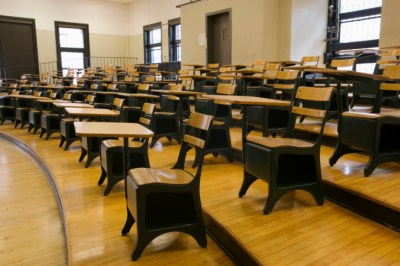 Source: Thinkstock
If you think you have retirement worries, even teachers who are on a state-run pension may be in the same boat, or even worse down the road. A new report card prepared by the National Council on Teacher Quality shows that state teacher pension systems had a total of $499 billion in unfunded liabilities in 2014. Yes, that is just one interest payment short of hitting a half-trillion dollars.

Another concern is that this debt load has risen by $100 billion since the same report card was prepared for 2012. States earned an average overall grade of C− for their teacher pension policies. That doesn’t sound very good.

The 2014 report card showed that roughly 70 cents on every dollar contributed to state teacher pension systems is now paying for debt rather than paying for retirement benefits. If that much funding is just supporting debt, what happens if the investment returns take a hit? And what happens if interest rates paid to support that debt start to rise?

Also, since 2008, more than half of the states have raised the amount of contributions that teachers must contribute into their state retirement systems. Also, the 2014 report card shows that less than half of teachers will qualify for retirement benefits despite making vesting periods longer. Here is another sad quote:

This year just nine states (down from 13 in 2012) — Delaware, the District of Columbia, Idaho, North Carolina, Oregon, South Dakota, Tennessee, Washington and Wisconsin have well-funded teacher pension systems, but some of these may not be as well-funded as they appear.

ALSO READ: States With the Best (and Worst) Schools

Alaska was the only state that was shown to get an A grade, and South Dakota earned a B+ as its grade. The state of Mississippi earned the lowest grade with an F for having a poorly funded teacher pension system that is not portable or fair to working teachers.

Want to see how your state ranks? This table from the National Council of Teacher Quality shows the grade for each state, shown highest to lowest rather than alphabetically.

The State Where People Are Leaving Their Jobs

Everyone in This City Has a Job