California Is Running Out of Water 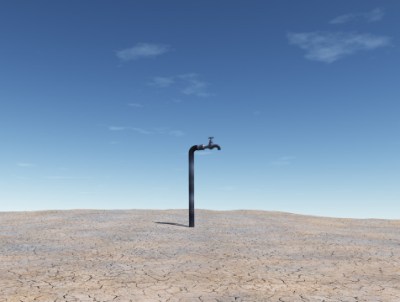 Source: Thinkstock
The U.S. Drought Monitor analysis and maps provided by the NOAA and University of Nebraska have shown that most of California has suffered from “exceptional drought” for months or longer. It is the worst, most dangerous measure of drought that the organization posts. Now, according to a prominent scientist, Californians can prepare for something even worse. The state will run out of water soon.

NASA expert Jay Famiglietti, who follows water patterns, wrote for the LA Times in an article titled “California has about one year of water left. Will you ration now?”:

As difficult as it may be to face, the simple fact is that California is running out of water — and the problem started before our current drought. NASA data reveal that total water storage in California has been in steady decline since at least 2002, when satellite-based monitoring began, although groundwater depletion has been going on since the early 20th century.

Right now the state has only about one year of water supply left in its reservoirs, and our strategic backup supply, groundwater, is rapidly disappearing. California has no contingency plan for a persistent drought like this one (let alone a 20-plus-year mega-drought), except, apparently, staying in emergency mode and praying for rain.

ALSO READ: The Worst States to Grow Old In

Famiglietti is pessimistic about the will of the residents of California and politicians as well as the foresight to deal with the problem. He also is not alone in his assessment of how immediate the problem is. The latest posting about the California water problem by the U.S. Drought Monitor reads:

What the analysis does not mention is the further negative effects on the California economy. Cities in the valleys that sit to the east of the Pacific Coast continue to have among the highest unemployment rates in the country, according to the Bureau of Labor Statistics. In El Centro, the jobless rate is 21%. In several nearby cities, the figure is in the double digits. Most of these rely on agriculture for much of their economic health.

If Famiglietti is correct, portions of California that are still in recession will not shed that status for years.

IRS Ends Coronavirus Tax Credits: Here's How Much You Can Claim Now

The Top City for First-Time Homebuyers Is Portsmouth