These represent the worst showing among 12 Rust Belt cities included in a recent study by the Urban Institute based on data from Experian.

Prior to the start of the Great Recession in late 2007, the once thriving manufacturing economy of Detroit had already been hit hard by job losses and emigration. That led to falling incomes and declining property tax collections that forced the city to turn to debt financing to meet budget requirements. The city’s homeowners sought subprime home financing, and when that blew up, distressed sales and foreclosures deepened the financial hole residents were in.

The city declared bankruptcy in 2013, and the subsequent recovery has been uneven at best. According to the Urban Institute:

[H]ome equity values have been on the rise and foreclosures have fallen close to pre-crisis levels, but mortgage credit remains extremely scarce. Similarly, job losses have stabilized, but Detroit’s unemployment rate remains highest among the 50 largest cities in the United States.

Here’s a look as some of the statistics the Urban Institute assembled on residents of Detroit compared with the U.S. national average. More data, discussion and definitions are available in the Institute’s report “The Financial Health of Detroit Residents.”

The Urban Institute makes a number of recommendations:

Detroit residents who have low credit scores and diminished financial health would benefit from a range of strategies, from structural interventions to city programs aimed directly at building residents’ financial health to steps individual residents can take.

At the structural level, city-led strategies may be important catalysts for improving the long-term financial outlook of Detroit residents. …

Detroit residents can take steps to improve their financial health, either with help from local programs or independent of them. …

When coupled with city-level evidence-based policies and programs that have broader impact on financial health, individual behaviors such as establishing liquid savings, paying debt on time, and limiting usage of available credit can put Detroit’s residents on the path toward better financial health. 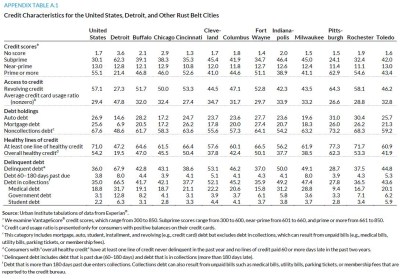