The size of the average U.S. household in 1790 was 5.79 people. By 2010 that figure was 2.58 people. That long-term trend appears to have reversed itself very recently, according to recently released Census Bureau data.

Pew Research reports on the reversal of the trend in household size: “But this decade will likely be the first since the one that began in 1850 to break this long-running trend, according to newly released Census Bureau data.” Among the reasons is that the growth in total number of households has recently become slower than the rise in the U.S. population. The number of people living in households, the data point out, has grown by 6% since 2010. The number of households is up only 4% over the same period. The household count stood at 121.5 million last year.

The authors of the study believe that the trend will hurt the housing market. As the number of people in households rises, the need for homes will drift downward. Ultimately, the rate at which new homes are needed will fall, and the need for items used in households, particularly furniture and appliances, will go through a period of attrition as well.

Why is the historical change happening now? Racial diversity has been one reason. The Asian, black and Hispanic populations in the United States are more likely to live in multigeneration households. The Great Recession also forced economically battered people to live together to save costs.

Pew expects the trend to continue into next year. Of course, it will not be geographically even. These are the fastest growing cities in every state.

There is more and more concern that there will be another recession. If the effects on where people live are similar to the last one, the number of people per household will rise again. The American population also is becoming less white and more Asian, black and Hispanic, which will contribute to household size as well. On the whole, it is likely the current trend will continue.

One final trend that could contribute to the change is that there are over 17 million vacant households in America. That is out of a total of over 138 million. While it is stating the obvious, any major change in the number of vacant homes could affect occupancy numbers as well. 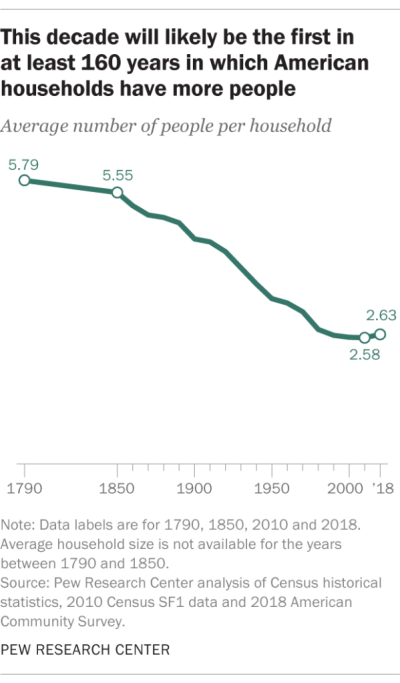