Once a year, the National Oceanic and Atmospheric Administration (NOAA), which is part of the U.S. Department of Commerce, puts out its winter forecast for the United States. The official release of the numbers comes from the NOAA’s Climate Prediction Center, a division of the National Weather Service. For winter 2020–2021, the predictions include temperature, precipitation and drought for each geographic region of the United States.

The NOAA says that its forecasts for the season are unusually accurate, mostly because of modern measurement techniques. As the winter forecast was issued, Neil Jacobs, Ph.D., acting NOAA administrator, said “NOAA’s timely and accurate seasonal outlooks and short-term forecasts are the result of improved satellite observations, more detailed computer forecast modeling, and expanding supercomputing capacity.”

A large part of the central portion of the Continental United States is expected to have temperatures near normal. This includes most of Oregon, Idaho, Colorado, Iowa, Minnesota, Nebraska, Indiana, Illinois, Michigan, northern Ohio and southern Minnesota.

The areas expected to be slightly warmer than normal run from northern California, northern Nevada, northern Utah, Colorado and much of Nebraska to southern Ohio, West Virginia, western New York State and Pennsylvania.

Several states and parts of states are expected to have higher than normal temperatures. These include southern California, southern Nevada, most of Oklahoma, southern Tennessee and northern Georgia.

The areas expected to have temperatures well above normal include part of Texas and southern New Mexico. 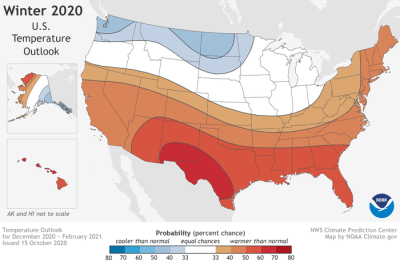 The areas expected to be slightly drier than normal run from the southern two-thirds of California through the southern parts of Utah and Colorado, through mid-Nebraska and across the northern parts of Lousiana, Mississippi, Alabama and Georgia to Virginia on the east coast.

The areas expected to get normal precipitation cover the northernmost parts of California to northern Nevada, southern Idaho, through southern Colorado, through most of Nebraska, Iowa and Missouri, across to Tennessee, Virginia and West Virginia, to Pennsylvania and all the states in the Northeast to the Canadian border.

Several areas are expected to be wetter than normal. These include most of Washington state, Oregon, northern Colorado, northern Nebraska, almost all of Minnesota, Wisconsin and Illinois. This area stretches to northern Kentucky and southern Ohio.

A small part of the nation is expected to get much more precipitation than normal. This includes northern Idaho, most of Montana and the northern part of North Dakota. In the east, it includes most of Michigan, Indiana and the western part of Ohio. 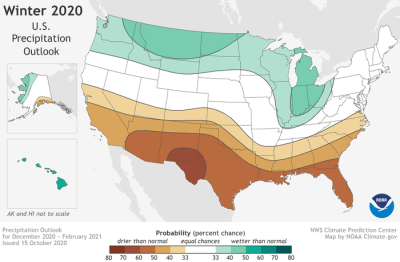 The drought forecast is grim for much of the nation. Drought is expected to worsen this winter in the areas already hardest hit. This includes northern California, all of Nevada, New Mexico, Colorado and Arizona. Many of these areas have been hit by huge wildfires. The areas where drought is expected to get worse also include western Texas, central Nebraska, western Iowa, North Dakota, parts of Indiana and central Ohio. Central Pennsylvania is also expected to have worsening drought.

The areas where drought is expected to develop include much of southern California and all of eastern Texas, as well as eastern Oklahoma and Nebraska. Areas that will have no drought cover the entire center of the nation and most of the east, from Minnesota, Arkansas and Louisiana across to the balance of the Gulf States, Tennessee and Kentucky to Virginia, West Virginia, Ohio, New Jersey, Delaware and Maryland.

A small section of the country is expected to have drought conditions that will end. These include northern New York state and most of New Hampshire, Maine, eastern Massachusetts and Connecticut. 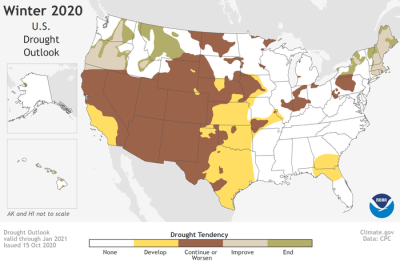 Perhaps the worst part of the national forecast is that the areas in the United States that are dry and suffering from drought will not get any relief.