What Is the US Drought Monitor?

The American West is currently suffering from a lack of rain and warmer than normal temperatures. Drought conditions are worsening in northeast California and south-central Oregon, southern Montana, central and western Wyoming, far east-central Wyoming, and the high country of west-central Colorado, according to the U.S. Drought Monitor.

The Drought Monitor is a joint project of the National Drought Mitigation Center at the University of Nebraska-Lincoln, the National Oceanic and Atmospheric Administration, and the U.S. Department of Agriculture. Every Thursday, the project releases an updated map of drought conditions in the United States.

The Drought Monitor categorizes precipitation levels on a scale of D0 to D4, from no drought (D0) to exceptional drought (D4). Intensity categories are based on five key indicators along with other objective measures, local condition reports from 450 expert observers scattered around the country, and drought impacts that subjectively support and validate the indicators.

The Drought Monitor is not a forecast. Rather, “it looks backward,” as the project team notes. “Drought is a slow-moving hazard, so you can be certain that an area will still be in drought if it doesn’t get rain. But it also may take more than one good rainfall to end a drought, especially if an area has been in drought for a long time.”

Because no two states experience drought impacts in the same way, the Drought Monitor uses observations made in past droughts to determine drought levels for each state. For example, in category D4 (exceptional drought), the Drought Monitor’s observed impacts included defoliation of trees and shrubs, brown grass, very high wildfire counts, and extremely low water levels in lakes and reservoirs, among other impacts.

Based on its seasonal drought outlook through Sept. 30, the northern tier of states from Michigan on the east to the Pacific Coast are all suffering from persistent drought in much of the state with some areas likely to develop drought conditions by the end of the period. In the West, California, Nevada, Utah, and all but a tiny portion of Oregon are expected to continue suffering from persistent drought. The eastern half of Washington and large portions of Idaho, Montana, Wyoming, Colorado, Arizona, and New Mexico are likely to see drought conditions persist or worsen this summer.

The following U.S. Drought Monitor map shows the extent of drought conditions in the United States as of June 17. 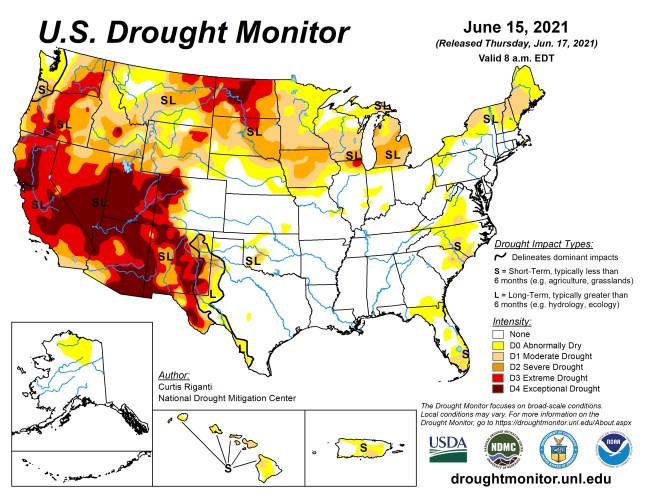 Only 21% of People in This County Are Vaccinated

Hospitalizations Are Up Nearly 600% in This County