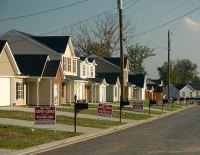 The advantages of small-town living are well known to Americans — and not just because of Norman Rockwellesque clichés about values, neighborliness and pace of life. These days, most prosperous small towns are bedroom communities with good public schools and easy commutes to large employment centers.

Have small-town housing markets bounced all the way back to prehousing crisis levels? Not just yet. But based on data provided by Zillow, a leading provider of real estate listings and market data, 24/7 Wall St. was able to identify small towns that have demonstrated strong signs of a healthy recovery in the past year.

Some of the large year-over-year increases are the result of a market correction, believes Louise Keely, senior vice president at Nielsen’s The Demand Institute, a leading provider of consumer behavior data. “Prices went down too much, and now the market is moving back to an equilibrium,” Keely told 24/7 Wall St. “I would expect a leveling out, and housing price growth nationally is going to be in the low single digits.”

Small towns will stay competitive with larger nearby communities, Keely says. “Small towns tend to have lower home prices than nearby urban areas, and that will make them more attractive for households with weaker household balance sheets than they were 7 to 10 years ago.”

As part of the greater Phoenix metro area, Florence suffered during the recent housing bust but is now staging a significant comeback. However, according to Prof. Mark Stapp, who runs the Masters of Real Estate Development program at Arizona State University’s W.P. Carey School of Business, the recovery is a bit misleading.

“We lost so much value in housing that the increase in price is driven off of a very low base,” cautions Prof. Stapp. “What you’re seeing is increases in prices off of a historic low — so it’s a bit deceiving because it’s not a sustainable growth rate. But I don’t think you’re going to see prices fall.”

No doubt, small towns will see their fair share of the recovery. A study by the National Association of Home Builders indicates that builder confidence is the highest it has been since June 2006. NAHB projects increased demand for new homes, which not only addresses buyer demands, but also the additional housing stock helps slow the rate of home price increases.

These are the small towns with booming housing markets.