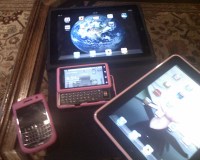 Smartphone pioneer Research in Motion Ltd. (NASDAQ: RIMM) has lowered its third-quarter guidance and said that it will take a “predominantly” non-cash charge of $485 million on its existing inventory of the company’s PlayBook tablet. RIM’s tablet has failed to capture significant consumer interest in the company’s battle with the iPad from Apple Inc. (NASDAQ: AAPL), the Kindle devices from Amazon.com (NASDAQ: AMZN), or tablets that use the Android-based operating system from Google Inc. (NASDAQ: GOOG). The company’s smartphones have also taken a beating in the marketplace from Apple and other handset makers like Samsung Electronics (OTC: SSNLF) and HTC Corp.

In its announcement, RIM said that it now believes “that an increase in promotional activity is required to drive sell-through to end customers.” So far, the promotional activity has been limited to severe price cuts at stores like Best Buy Co. Inc. (NYSE: BBY) and Wal-Mart Stores Inc. (NYSE: WMT), where PlayBook prices have been cut to $199 or $299, depending on memory configuration. That’s a discount of $300 from the original price of the device.

The company noted that it had seen “a significant increase in demand” for the PlayBook following its promotional pricing. Right — selling something at less than cost almost always generates more demand. If this is the only promotional strategy RIM has, the strategy’s a loser.

RIM also said that the its new strategy — that is, giving the PlayBook away — will “accelerate the adoption of its QNX-based platform,” which the company now plans to ship in February. Consumers who buy a PlayBook at the promotional pricing will get a free upgrade to the new software when it becomes available. Once again, RIM is being forced to give away something that it could have charged real money for.

On the financial front, RIM guided third-quarter EPS to the mid-point of its previous guidance of $1.20-$1.40, and lowered revenue estimates “slightly” from the previous range of $5.3-$5.6 billion. The company also expects lower volume on fourth-quarter shipments. Finally, RIM “no longer expects to meet its full year adjusted diluted earnings per share guidance of $5.25-6.00.” The company did not say what it expects full-year EPS to come in at.

RIM’s needs to get its BlackBerry phone sales back up. The PlayBook is a sideshow for the company, and will continue to be a sideshow until the tablet offers full compatibility with the company’s phones. But even then it might be too late, given the stream of new tablets eager to cut into Apple’s enormous market share lead. RIM needs a far more compelling product than it now offers and it needs to price it so that it makes money.