The Worst CEOs In American History 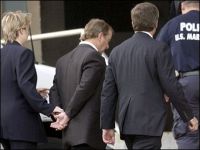 The age of the American CEO did not begin until the end of the 19th century. Prior to that time, all the largest businesses in America were run by owners and families acting as proprietors. The best examples of these were in four industries: steel, finance, oil, and railroads.

Although the firms often had general managers, most historians believe that the period in which the CEO dominated large corporations did not begin until Alfred Sloan took the helm of GM in the mid-1930s.

The 24/7 list is based on a review of the Fortune 500 companies back to 1955. In order to perform further analysis, we also consulted the histories of US corporations dating back to the 1880s.

Those selected for the list fall into one of two simple categories – those who ruined the companies completely while they served as sitting CEOs and those who did severe damage from which their firms could never possibly recover. Some will make the argument that many of these CEOs should be excluded because their companies failed as a result of fraud committed by the CEOs. In each of these cases, however, the chief executives ruined the company. It does not change this fact if this occurred because of avarice or mismanagement.

Readers may argue that there are other CEOs who should have been on this list.  However, each of the CEOs on this list ran their companies when they were at or near their peak performance.   Many companies on this list like Pan Am and Eastman Kodak, dominated their industries. That makes these failures all the more colossal and, almost certainly, avoidable.

1.   Jonathan Schwartz. By the time Sun Microsystems was bought by Oracle for $7.4 billion, Jonathan Schwartz, the hip, blogging, ponytail wearing CEO, had ruined the firm’s prospects so badly that acquisition was its only option.

In the early 1980s, the company was founded by a small group of engineers and its CEO, Scott McNealy.  During his tenure, Sun Microsystems grew to become one of four dominant players in the server and processor space, which also included Oracle, HP and IBM. Prior to Schwartz’s appointment by McNealy, Sun was a largely profitable and competitive company.

Schwartz’s promotion to CEO in April 2006 was followed by a long series of losses. Despite its strong position, Sun started to fall apart as it lost market share in its main server business to HP and IBM.  The company’s shares fell from almost $27 to under $4 from late in 2007 to late 2008; Sun also later fired nearly 6,000 people, or about 18% of its employees.

In 2008, in an attempt to diversify, Sun bought MySQL AB, the company offering the popular open source database. The acquisition did not work.  As Sun’s share of the server market continued to fall, Schwartz tried to improve market adoption of its Java software, which never brought in much revenue.  Despite some success, the problem was that Java is free and Sun never came up with a realistic model to monetize it.

Sun could have become one of the largest enterprise technology companies in the world. Schwartz blew that chance. Larry Ellison did not.

2.   Ken Lay. Enron grew out of Northern Natural Gas Company and Internorth, both essentially natural gas companies.  Enron reached $101 billion in sales in 2000 despite this humble origin, through a series of acquisitions and expansions into new businesses. Ken Lay became CEO in 1986 and presided over most of the company’s growth which was largely fueled by diversification into energy generation, gas distribution businesses and water based utilities. Lay was so successful at marketing the firm to Wall St. and to the press that it was Fortune’s “America’s Most Innovative Company” for six years in a row, from 1996 to 2001.

It became clear in 2001 that Enron was hiding portions of its liabilities off of its balance sheets. Most of its assets and earnings were doctored. By the end of the year, Enron filed for bankruptcy. An investigation of the scandal found that Lay had an active hand in inflating the company’s financial health. In 2006, Lay was found guilty of securities fraud and other charges. He died July 5, 2006, shortly before his sentencing.