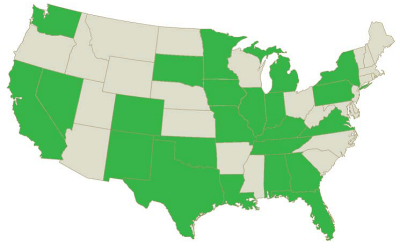 Although all the countries which attended the recent Climate Summit in Cancun, Mexico claimed to care about the environment, they have an odd way of showing it. The challenges are more profound in the US than many other countries. America has been the leader of the industrial world since the Great Depression. That makes it the nation that has polluted the most for the longest amount of time.

24/7 Wall St. has analyzed the environmental issues facing the 50 states. Pollution is as much a state problem as a national one. Ohio, which ranks poorly on our list, has more problems than Vermont, which ranks well.  Unlike Ohio, Vermont does not have to regulate hundreds of factories, which pollute the water and air. Similarly, Ohio does not have great tracts of land where it can install vast numbers of wind farms. Texas, which ranks first in wind energy, does.  Texas, however, has the largest number of coal-fired power plants.  As a consequence, the state burns more coal and produces more carbon dioxide than any other state. No two states have the same problems. This means that solutions must be informed by both local and national concerns.

24/7 Wall St. examined energy consumption, pollution problems and state energy policies with the help of industry experts, government databases and research reports.  Data comprising 49 separate metrics came from a number of sources. Of the 49 metrics chosen, rankings for all of them were reflected in 27 final separate categories.  The sources included The Pew Center on Global Climate Change, The Energy Information Administration, The Department of Energy, The Interstate Renewable Energy Council, Renewable Energy World, American Council For an Energy-Efficient Economy (ACEEE), The Environmental Protection Agency, The American Lung Association, Environment America’s Research and Policy Center, The Political Economy Research Institute, and the Bureau of Economic Analysis.  Although other state factors like industry type and scale, GDP, population and natural resources were considered, they did not impact the rankings.

We used only recent information available for all states – issued in 2009 and 2010 — and collected thousands of data points to reach our rankings of the most and least “green” states.  For each metric, the higher the rank, the better the score, the lower the rank, the worst.

The rankings, in other words, are balanced so that one or two grades from the study cannot overwhelm two or three other grades.  For example, Mississippi ranks third on our list in Environmental Protection Agency violations.  Meanwhile, the state ranks in the bottom half of our list for financial incentives for alternative energy and 49th in energy efficiency. Conversely, Iowa, is in the bottom half for carbon footprint, air particle pollution, and water pollution. Nevertheless, the state ranks in the top ten overall because it scores well in areas such as financial incentives for energy consumption and wind energy production.

The results of this effort are what we believe to be among the most comprehensive report on the state of pollution in all 50 states coupled with each state’s responses.

One of the conclusions that can be drawn from this report is that the problems affecting the environment are significant and cannot be readily solved. States and the federal government can make progress, but that progress is limited by the conditions of each state. They include the type and scale of industry, the amount of regulation imposed on those industries, the number of people that need to be supported, and the natural resources of the state. Unfortunately, because the US now runs annual deficits of more than $1 trillion, there is no appetite to increase the annual deficit by hundreds of billions of dollars to improve the environment.

In 1963, John Kennedy said, “Our problems are man-made, therefore they may be solved by man.” Given America’s problems with the environment, however, that may no longer be true. What is true, based on our research, is environmental problems can be identified more quickly than they were in the past and there are more programs established to solve these problems. Policy makers and the public now realize that the amount of time left to address many of the most pressing problems is limited.

This is the 24/7 Wall St. ranking of the 50 states based on the environmental problems in each state and how effectively these problems are addressed.

Vermont has the second smallest population and the lowest GDP in the country.  As a result, it produces less pollution than most states. The state releases the fewest carcinogenic toxins and has the smallest carbon footprint in the country. Vermont’s success as a green state isn’t limited to pollution, however: the “Green Mountain State” ranks in the top 15  in 20 out of 28 ranked categories. Vermont has a number of policies to promote efficiency, alternative energy, and reduce pollution, and so far it has succeeded better than any other state.

Almost half of the electricity generated by Maine comes from renewable sources.  The state holds the number one spot for percentage of energy produced from non-hydroelectric renewable sources, a total of 23.7%. Since the state has the highest percentage of timberland in the country, it is not surprising that a large portion of its energy comes from wood and wood waste.

Since nearly 25% of Hawaii’s gross state product comes from tourism, the state is quite concerned about the environment. Hawaii produces the least amount of toxic waste and received the highest score for two air quality measurements: the EPA’s Risk-Screening Environmental Indicators toxic exposure rank and the American Lung Association’s ozone pollution index. The state also ranks sixth in energy saving programs and policies.