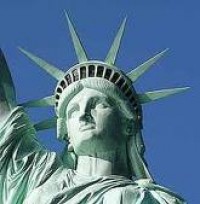 The debate about who is “free” in the United States is older than the Bill of Rights. Whether people are better off with laws designed to protect them but limit their freedom, or with very few laws, allowing them to fend for themselves, clouds the issue.

Consider helmet laws: people who don’t wear motorcycle helmets are probably more often seriously injured in accidents. Is the freedom to ride helmetless worth the increased risk? This is one simplified version of the debate surrounding almost all issues of liberty in the United States.

24/7 Wall St. reviewed the George Mason University’s biannual “Freedom in the 50 States” report authored by the school’s Mercatus Center, a libertarian think tank. According to the report’s authors, they “explicitly ground [their] conception of freedom on an individual-rights framework. In [their] view, individuals should be allowed to dispose of their lives, liberties, and properties as they see fit, as long as they do not infringe on the rights of others.” As a result, a more “free” state in the study will have more liberal social policies and more conservative economic policies. The report considered “a wide range of public policies, from income taxation to gun control, from homeschooling regulation to drug policy.

One of recurring themes in the report is the issue of eminent domain. People who have their property seized by the state are worse off than those whose property cannot be. That is until, perhaps, they cannot travel easily from their property to some other point because the state could not build a road. The way that the Mercatus Center looks at this problem, people would be better off to own their land and build their own roads. That is a brilliant approach until it becomes clear that it is impractical. People may be better off without regulations for how their children should be educated, but these same people may not have the background to home school their children. They have freedom, but one which may cause their offspring to be poorly educated.

24/7 considered the ten states that the report lists as “most free” and those ten that are “least free.” We have used Mercatus Center analysis and definitions for what makes people free. Here is a list of the most and least free states, according to the Mercatus Center.