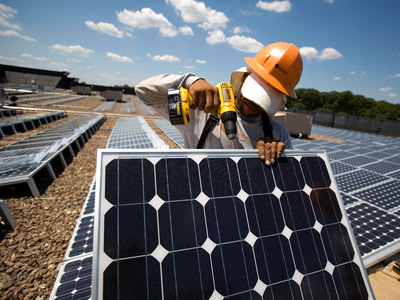 It’s no secret the U.S. is struggling with high unemployment and dismal job growth. But at least one industry seems to be bucking the trend. “Sizing the Clean Economy: A National and Regional Green Jobs Assessment,” is an unbiased report published by Brookings. It demonstrates that, despite what some might think, solutions to environmental problems are not a drag on federal and state budgets, and can instead create revenue and new jobs.

The Brookings report shows that each of the top 100 American metropolitan areas by population has been able to add jobs as a result of green initiatives. Almost all of these jobs pay better than the median wage for that urban area.

In a period in which U.S. manufacturing has been in a multi-decade decline, the data give hope that there could be at least a modest resurrection in the sector.

The report also shows that green businesses added 565,337 net new jobs in America between 2003 and 2010. While that seems modest, the context is important. The sector added jobs in a period when a struggling U.S. economy lost thousands of jobs and when the government’s austerity measures, which have already caused thousands of layoffs, will likely cause thousands more.

Also encouraging is where many of the new jobs have been added. This new employment is often in some of America’s older cities that have been ravaged by changes in the U.S. job base in the last thirty or forty years. Green jobs have begun to fill in for some positions that have been lost and will never come back. Among the top ten markets with most jobs from green initiatives are Albany, Toledo, Little Rock and Knoxville. Unemployment was 13.4% in Toledo at the depth of the recession because it depended on car industry jobs. That number is down to 9.3%, which is close to the national average and better than many other cities that were part of the once-powerful auto manufacturing industry.

One positive is almost certain to come from the publication of “Sizing the Clean Economy: A National and Regional Green Jobs Assessment.” Public policy about employment creation is often based on projections of where jobs may be added in the future and in what industries. Brookings has taken some guesswork out of that. Public funds have found an actual return in “green,” according to the data it presents.

24/7 Wall St. looked at the ten cities that had the most rapid annual growth in green jobs from 2003 to 2010. We used BLS data to show the month when the city had its worst unemployment during the recession and what the number was in May of this year. We also compared the city’s unemployment rate to that of the state where it is located to determine whether the city was doing better or worse.

In some of the cities on the 24/7 Wall St. list of “American Cities With The Fastest Green Jobs Growth,” the number of people in the green jobs workforce has almost doubled. That figure and the clear contribution of the green movement to local economies speak for themselves.