Unilever (NYSE: UL) subsidiary Ben & Jerry’s has announced solidarity with “Occupy Wall Street,” even donating ice cream to hungry protestors at the movement’s makeshift headquarters’ in New York City’s Zuccotti Park. Notwithstanding its long history – from cows to cones – of social activism , the ice-cream maker’s latest endorsement would seem to directly conflict with the capitalist practices of its global parent. 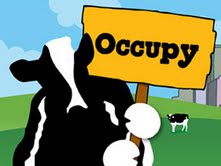 On Ben & Jerry’s home page, the company’s Board of Directors, the chief scoopers of eclectic flavors — Cherry Garcia, Chubby Hubby, and Schweddy Balls, to name a few – promulgated to “those who occupy,” that the company stood with them:

“We, the Ben & Jerry’s Board of Directors, compelled by our personal convictions and our Company’s mission and values, wish to express our deepest admiration to all of you who have initiated the non-violent Occupy Wall Street Movement and to those around the country who have joined in solidarity.”

From sourcing eggs in its ice creams only from free-range chickens to buying containers from paper suppliers exercising sustainable forestry practices, the board’s recent enjoinment epitomizes the core of the company’s mission statement.  Additional declarations of sympathy on Ben & Jerry’s website include protests against the “inequity that exists between classes in our country” and how “many workers who have jobs have to work 2 or 3 of them” simply to get by.

Occupy Wall Street is a “people-powered” protest that began on September 17, 2011, in Liberty Square in Manhattan’s Financial District, and has spread to over 100 cities in the United States, according to the movement’s unofficial de facto online resource. To date, the resistance movement marches daily under the collective banner of “restoring people’s democracy in America.” However, as the assemblies have attracted divergent crowds, from anarchists and unemployed or underemployed college graduates to sixties throwbacks, the collective has yet to coalesce under a singular message, other than a media-inspired banner: Taking back economic power from major banks and multi-national corporations (Wall Street) – whose corrosive greed (the narrative continues) fueled the global economic collapse in 2008.

Are Ben & Jerry’s actions nothing more than cheap platitudes, an attempt to co-opt a burgeoning grass roots organization through tasty treats? “An improved means to an unimproved end,” observed American poet and philosopher Henry David Thoreau. Skeptics remind us that sales and profits of Ben & Jerry’s flow directly to Unilever, a consumer-goods conglomerate that purchased the Vermont-based food purveyor in 2000 for $326 million.

Unilever generated more than $60 billion in sales last year from operations in more than 100 countries worldwide. Recognizable products in the U.S. include a range of foods and house-hold care items, from Lipton teas to Dove soap and Surf laundry detergent.

On any given day, more than two billion people use a Unilever product, having purchased their goods with a plethora of currencies, from Euros or U.S. dollars to Brazilian reals and Indian rupees. Ergo, whether hedging against currency or commodity risks, Unilever is integrally tied to the hip of major banks.

On October 5, the company completed its $3.7 billion cash acquisition of Alberto-Culver, a leading U.S.-based consumer goods company with personal care products that include the Alberto VO5, Nexxus, and Noxzema brands. This merger followed on the heels of the purchase of Sara Lee Corp.’s (NYSE: SLE) shower-gel and European detergents business for $1.9 billion late last year.

“It is useless for the sheep to pass resolutions in favor of vegetarianism, while the wolf remains of a different opinion.” ~ British theologian William Ralph Inge (1860 – 1964)

Hyena’s cries of morality aside, with more than $10 billion in long-term debt on its balance sheet, Unilever needs ready access to capital to fund ambitious growth plans. Hence, while one hand scoops out ice cream to protestors, the other hand shakes hands with the enemy: Deutsche Bank (NYSE:DB), J.P. Morgan (NYSE: JPM), and UBS (NYSE:UBS) – three Wall Street investment banks who were lead underwriters on an aggregate $1.5 billion in senior notes financing for Unilever last month.

Dogged by complaints from environmental groups about its deleterious environmental and social footprint – such as, allegedly buying palm oil from suppliers cutting down Indonesia’s rain forests; child labor violations in Third-World countries; and, lethal cosmetic testing on animals – the company has taken steps in recent years to clean up and improve its corporate image. Unilever has unveiled its Sustainable Living Plan, meant to improve quality of live for billions while simultaneously “respecting the planet.” Goals management is intent on achieving by 2020 include halving the environmental footprint of its products and sourcing 100% of agricultural raw materials from sustainable sources.

In the last decade, management claims it has reduced greenhouse gas emissions from energy use and water per ton of production consumed by 44% and 66 percent.