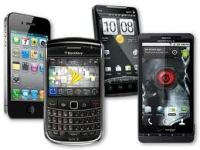 Mobile ad network Millennial Media Inc. (NYSE: MM) has release a report on mobile advertising spending, and while the company clearly has a dog in the hunt, the survey data compiled by comScore Inc. (NASDAQ: SCOR) for Millennial has some general interest.

The mobile ad market is expected to grow from $1.8 billion in 2011 to about $13.5 billion by 2015. Millennial competes against Apple Inc. (NASDAQ: AAPL) and its iAds platform and Google Inc. (NASDAQ: GOOG) for a place in that market, as well as with other smaller players.

Smartphone adoption grew by 42% in 2011 and of smartphone owners those who use mobile devices are 22% more likely to own a tablet. Smartphone users who make entertainment purchases typically buy tickets, DVDs, games, or digital downloads, or use the devices to pre-order these items. The biggest reason for consumers to use smartphones to purchase entertainment products is convenience — according to the comScore study two-thirds of smartphone users cite convenience as the most important reason for making a purchase on a mobile device.

About 92% of mobile entertainment advertising promotes movies, cable and network TV programming, and DVD releases. Only 8% of the advertising spend currently generates sales. And while ad networks like Millennial are glad for the revenue, if they can figure out a way to make mobile advertising drive more sales instantly, advertisers will be lined up around the block.

The pieces are being put in place for just such a revolution. Mobile payment systems, near-field communications devices, in-app purchasing, and digital wallets are going to make smartphone sales even easier for consumers. And more lucrative for both ad networks and vendors.