Verizon Communications Inc. (NYSE: VZ) apparently wants to buy out the 45% of Verizon Wireless it does not own. The other portion is owned by Vodafone Group PLC (NASDAQ: VOD), which will be offered $100 billion. There have been rumors for years that a deal would be consummated. Verizon takes on a very large risk if it finally does make the purchase. The wireless service subscription business in the United State has become a zero-sum game, at least as far as absolute subscriber counts go. More than 300 million people have wireless service accounts, and that is at or above the level of the U.S. population. The big four wireless companies — AT&T Inc. (NYSE: T), Sprint Nextel Corp. (NYSE: S) and T-Mobile, which will soon merge with MetroPCS Communications Inc. (NYSE: PCS) — continue to try to take market share from one another. Sprint is likely to step up its pursuit of customers because of a new investment from likely owner Softbank. Each of these companies has increased its fees for data used by customers, but competition has put price pressure on these initiatives. Reuters said of Verizon’s bid for Vodafone’s stake:

The sources said Verizon was now ready to push aggressively for a deal. It hopes to start discussions with Vodafone soon for a friendly agreement but is prepared to take a bid public if the British company does not engage, one of the sources added.

“I don’t really see this as a surprise,” one of Vodafone’s 15 largest investors told Reuters, on condition of anonymity. “The talk about this deal has been quite intense recently. We knew that Verizon were definitely a keen buyer and that Vodafone were a keen seller.”

The threat of a triple-dip recession in the United Kingdom has gone away, although gross domestic product (GDP) growth is so small that the discussion is a matter of semantics. The Office of National Statistics reported on preliminary U.K. GDP:

The news will not stop the debate over whether the government’s ongoing push for austerity has ruined any chance for growth of GDP. As is true throughout the European Union, United States and Japan, the proponents of stimulus argue that without aide, none of these troubled economies will enter a phase of strong recovery.

Apple Inc. (NASDAQ: AAPL) still holds the top spot among tablet makers. But Microsoft Corp. (NASDAQ: MSFT) has started to get a foothold in the business. The latest data on global tablet shipments: 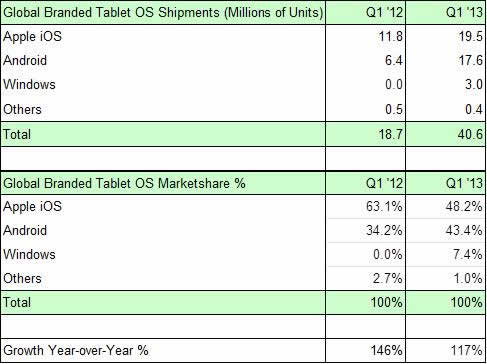