How Pelé Is Making the Most of Brazil’s World Cup 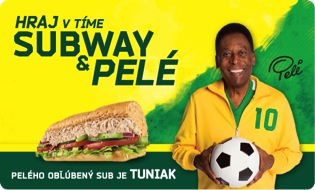 Source: Subway
Pelé is arguably the greatest soccer player of all time, and as a result of his illustrious career on the pitch, his name is worth millions. Earlier this year, Forbes ranked Pelé as one of the world’s 10 highest-paid retired athletes, and, in 2013, he was named the most influential celebrity in his native Brazil. At 73, he continues to be one of the most sought-after brands in sports because of what he represents — athletic superiority — and who he can sell it to: retirees. With Brazil’s World Cup fast approaching, is it any surprise Pelé is making the most of it?

An enormous opportunity
According to Forbes, Pelé made roughly $15 million from endorsements last year. A few of his biggest sponsors include Volkswagen, Procter & Gamble (NYSE: PG), Banco Santander (NYSE: SAN) and Subway.

Subway added him to its books last year. Although the deal’s financial details weren’t disclosed, the sandwich giant revealed it’s a multi-year arrangement that will likely last through the 2016 Summer Olympics in Rio. Subway displays Pelé’s likeness in the U.S. and abroad, including Brazil, where it has more than 1,000 restaurants.

The football star’s relationships with Procter & Gamble and Volkswagen were also established in the past couple of years. And more recently, he’s announced a revamped arrangement with Coca-Cola (NYSE: KO), in addition to deals with Hublot, Golazo, and Emirates. Each is built on a similar premise: Pelé’s exposure during the World Cup — and later the Olympics — represents an enormous marketing opportunity.

Every televised appearance, whether he’s in the stands or showing off the tournament’s trophy, gives his sponsors a chance to be in the global spotlight. A little over 900 million people watched the last World Cup, FIFA reports.

The business of retired athletes
Pelé’s brand is set to make $25 million this year, according to Bloomberg, and that figure could hit a whopping $100 million by 2016, according to Legends 10, Pelé’s marketing manager. “It was no secret the World Cup and Olympics were going to be in Brazil, and Pele is Brazil,” Legends 10 CEO Paul Kemsley told Bloomberg earlier this year.

Given this influx of sponsorship dollars, where does Pelé stand among all retired athletes? 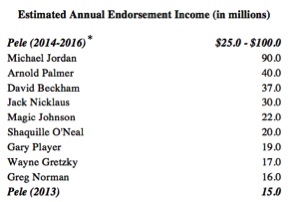 If $25 million is a reasonable floor, Pelé should surpass Greg Norman, Wayne Gretzky, Gary Player, Magic Johnson, and Shaquille O’Neal in annual endorsement income this year. Any additional deals signed in the lead-up to the Olympics will determine if he’s able to rival Michael Jordan’s $90 million annual take.

The bottom line
Most retired athletes are relegated to static marketing like billboards and TV commercials. After they hang up their gear, there aren’t very many opportunities to be actively present during live sporting events. And that’s exactly why Pelé’s endorsement potential, at least in the short term, is so gargantuan. Brazil’s biggest celebrity has a good chance to be the face of this year’s World Cup, and if all goes well, he should be heavily involved in the 2016 Summer Olympics as well.

You might not make eight figures a year…
But there is an investment strategy out there that produces real, repeatable profits. Give me five minutes and I’ll show how to take advantage of it. Every year, The Motley Fool’s chief investment officer handpicks one stock with outstanding potential. It’s perfectly positioned to cash in on one of the upcoming year’s most lucrative trends. Last year his pick skyrocketed 134%. And previous top picks have gained upwards of 908%, 1,252% and 1,303% over the subsequent years. Believe me, you don’t want to miss what could be his biggest winner yet! Just click here to download your free copy of “The Motley Fool’s Top Stock for 2014” today.