Three Things You Need to Know About Publicly Traded Athletes 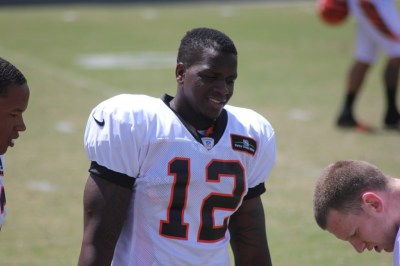 Source: Image via Navin75, Flickr
Fantex is making a name for itself as the only brokerage that allows users to trade stock in professional athletes, and now, it’s adding another NFL player to its books. Earlier this week, it reached an agreement with Cincinnati Bengals wide receiver Mohamed Sanu, who is entering his third year as a pro. Just like other Fantex signees of the past – Vernon Davis, Arian Foster and E.J. Manuel – it’s important to understand how the concept works before investing. There are three main things you should know.

1. An athlete should be evaluated by his brand value.
Most fans are used to judging NFL players, and all athletes in general, by their ability to perform on the field. Whether it’s touchdowns in football or homeruns in baseball, there’s a comfort level associated with basic counting stats. For Fantex, however, it’s not that simple.

Whether it’s Sanu, Davis, or another football player in the future, anyone investing in this asset class should be confident of one thing: The athlete’s underlying value will eventually surpass his Fantex estimate. In other words, if you’re confident Sanu will make $20 million over the next decade – a scenario that’d require him to improve on the field while becoming more marketable – it might be smart to buy in. If not, stay away.

Considering Sanu makes less than seven figures a year from his rookie contract, there’s a chance he’ll never make more than the $15.6 million Fantex thinks he’s worth. Given that the average NFL player’s career is about seven years, he’d have to make an annual salary of $4 million after he becomes a free agent in 2016 to break even before retiring. That’s a major pay raise for someone who isn’t even the No. 1 wide receiver on his own team. On the other hand, he’s still just 24 years old, and playing across from one of the best wideouts in the NFL – A.J. Green – could help his development.

There’s also the possibility of endorsement income. If Fantex can boost Sanu’s marketability to be on par with peers like Dwayne Bowe or Clay Matthews – both make about $500,000 a year off the field – it will help.

At the end of the day, my point is this: Investors must think about both on-field and off-field income when evaluating an athlete, and consider what the sum of those two values will be over the long run.

ALSO READ: Cities Paying the Most for Sports Teams

2. There is a possibility, but not a guarantee, of dividends.
This is another major point, and it’s one often missed by pundits. Earlier this year, Fantex’s CEO, Buck French, told me dividends are a possibility. Here’s what I wrote then:

“Fantex should pay dividends as long as it becomes profitable, which will depend on its ability to cultivate the brand values of its athletes. The more valuable a brand is, the more brand income Fantex receives from its minority stake. A major endorsement deal for Vernon Davis, or a signing bonus, will likely boost his tracking stock’s intrinsic value, but it will also directly improve Fantex’s ability to pay dividends.”

The more athletes Fantex has under its belt, the better it is for investors. That’s because it’s possible it will dole out dividends to shareholders equally. Take the example from above: If Davis receives a windfall contract, Fantex could reward anyone invested in Sanu, Manuel or Foster with a dividend.

Of course, there’s no guarantee, but the possibility of extra income is something to consider. And at the very least, it indicates investors should be pleased every time Fantex announces an agreement with a new player.

3. The market will ultimately determine an athlete’s value.
Just as Price-to-Earnings multiples vary wildly in the stock market, different athletes will probably fetch different Price-to-Brand Value multiples. A young quarterback, for example, might have more potential than an aging wide receiver, and would theoretically command a higher price on the Fantex exchange. Sanu, by comparison, may deserve a higher P/BV multiple than Davis because he’s six years younger, and thus, has more time to improve his career trajectory.

Valuation is never an exact science. And that’s especially true in a space as new as this one, but if the market for publicly traded athletes behaves like others, it could pay off to keep the P/BV concept in mind.

The bottom line
If you’re considering an athlete’s IPO, remember the risk of injury. Football is a violent game, and everything from a concussion to an ACL tear could permanently derail a player’s ability to generate income. With that in mind, the more options Fantex gives investors to diversify, the better.

For my money, though, the day I invest in Mohamed Sanu is the day it’s possible to buy shares of his teammates. A basket of Sanu and other Bengals receivers like A.J. Green, Marvin Jones and Brandon Tate would be ideal. Thankfully, Fantex continues to add athletes, so this scenario may not be far off.

But while you and I wait for that day to come – it’s better to stick with one of the most time-tested ways to get rich: dividends. The smartest investors know that dividend stocks simply crush their non-dividend paying counterparts over the long term. That’s beyond dispute. They also know that a well-constructed dividend portfolio creates wealth steadily, while still allowing you to sleep like a baby.