Source: Thinkstock
Investors have all-time highs to cheer for the S&P 500 Index and in the Dow Jones Industrial Average, but not yet in the Nasdaq. After a nine-day rally, Nasdaq stocks as a whole were down for much of Monday. The current flat-line is 4,956.

What 24/7 Wall St. wanted to evaluate is which of the major Nasdaq stocks would lead the index back over 5,000 — and perhaps ultimately to new all-time highs.

With Nasdaq 5,000 back in the game, this puts the Nasdaq within striking distance of its all-time highs from March of 2000, under the tech bubble of the late 1990s and 2000. Many investors are wondering if there is a new bubble forming, and 24/7 Wall St. wanted to make some basic valuation and performance observations.

Apple Inc. (NASDAQ: AAPL) is almost half of the Nasdaq 100 move so far in 2015, due to its massive market cap of now over $760 billion. Year to date, the stock was last seen up 17.8%. This is a gain of more than $100 billion in market cap, which would be the equivalent of adding a whole new 12th or 13th value of the Nasdaq 100 stocks out of the blue. Keep in mind that Apple is now worth twice as much as any other public company, and we recently highlighted what its relative value appeared to be worth more than GE, Wal-Mart, GM and McDonald’s combined. Apple is at all-time highs, yet it is valued at only about 15 times expected 2015 earnings per share.

Then there is Amazon.com Inc. (NASDAQ: AMZN), with its gains of over 23% so far in 2015. It seems as though Jeff Bezos is getting on board with the message from investors that maybe the company should be operated with profitability now that it is 20 years old. Its market cap of $178 billion at this point puts its performance at second place year to date, in percentage terms of the large Nasdaq stocks. Despite a solid fourth-quarter earnings report, Amazon is valued at a whopping 400+ times expected 2015 earnings — and it is valued at 170 times expected 2016 earnings.

Netflix Inc. (NASDAQ: NFLX) has risen the most of the large Nasdaq stocks, with a gain of just under 40% so far in 2015. The problem is that its $28 billion market cap keeps this from being too dominant. After all, there are 12 Nasdaq stocks worth more than $100 billion, and 34 Nasdaq stocks are worth more than Netflix’s $28 billion in market cap. Netflix remains a high-beta name, and its valuation is still over 100 times expected 2015 earnings expectations.

Biogen Idec Inc. (NASDAQ: BIIB) is among the top five large Nasdaq stocks in performance so far in 2015, with a year-to-date gain of just above 20%. It also ranks number 14 among the largest Nasdaq stocks, with a market cap of almost $96 billion. Biogen trades at about 24 times expected 2015 earnings expectations. This is not especially high considering double-digit sales and earnings growth, but it is not cheap either.

One of the runner-up stocks is none other than Cisco Systems Inc. (NASDAQ: CSCO). It is doing in 2015 what Microsoft and Intel did in 2014. With a gain north of 7% so far in 2015, Cisco is the best-performing tech stock of the 30 Dow Jones Industrial Average components, but it is barely in the top 30 of the large Nasdaq stocks. Raising its dividend and giving better earnings outlooks is helping its valuation and perception adjust. Still, Cisco trades at a discount to the market at about 13 times next year’s expected earnings, and it is worth $150 billion in market cap.

Whether a market is expensive or in a bubble is something that is always up for debate. That being said, the Nasdaq may have a handful of stocks to thank for its most recent gains, but its leadership is not solely made up of nosebleed valuations. 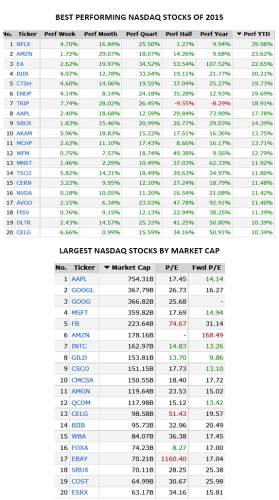