States With the Highest (and Lowest) Taxes 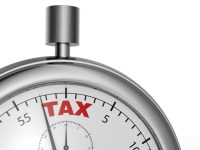 During the 2011 tax season Americans paid an average of 9.8% of their income in state and local taxes — on top of taxes collected by the federal government. This is part of the total tax burden of Americans, according to a report by the Tax Foundation. It was as low as 6.9% in Wyoming and as high as 12.6% in New York.

Generally, tax burdens were highest on the East Coast, while residents of Midwestern and Southern states faced relatively low tax burdens. Residents of New York and New Jersey paid more than 12% of their income in state and local taxes alone, the most in the nation. Wyoming and Alaska residents, on the other hand, paid 7% of their income or less. Based on research conducted by the Tax Foundation, these are the states where taxes were the highest and lowest as a percentage of total income.

According to Jared Walczak, policy analyst at the Tax Foundation, the report demonstrates the enormous differences both in state tax policies and how tax burdens are experienced in each state. While some states did away with certain taxes altogether, others adopted a wider range of taxes.

On the other hand, states that had high tax burdens typically utilized a wide range of taxes. Income taxes in particular, however, tended to be the highest in high tax burden states, Walczak said.

New York, the state with the highest tax burden in America, was one of just two states that taxed wealthy individuals the top tax rate on all the income they earned, not just on earnings above the tax bracket’s threshold. California, with the fourth highest tax burden as a percentage of total state income, had the highest top income tax rate, at 13.3% for individuals earning at least $1 million annually.

Many of the states with low tax burdens benefit from having taxable resources such as oil in addition to taxes on incomes, property, and the spending of their residents. In the case of Nevada, gaming is a major source of revenue. In the case of states such as Wyoming and Alaska, severance taxes — charged on businesses producing oil and natural gas — have historically been a large source of revenue. These revenues have kept tax burdens low in these states.

To identify the states with the highest and lowest tax burdens, 24/7 Wall St. reviewed state and local tax burdens as a share of state residents’ income in fiscal 2011 provided by the Tax Foundation. Property, income, general sales, and excise tax rates and collections per capita also came from the Tax Foundation. We also looked at all taxes paid by residents to the state or to various localities, such as their city and school districts, in fiscal 2011, 2012 and 2013. In addition to data from the Tax Foundation, 24/7 Wall St. also reviewed figures from the U.S. Census Bureau and the Bureau of Economic Analysis (BEA) for 2013.

These are the states paying the highest (and lowest) taxes.