The United States is supposed to be the best-looking entrant at the ugly contest when it comes to major global economies. So what gives with GDP in 2015? It came in at a paltry 0.2% in the first quarter of 2015, compared to a gain of 2.2% in the fourth quarter of 2014. Even if there is a debate about how first-quarter GDP is traditionally undercounted, the reality is that the economic growth is very weak.

Also, the GDP price index actually decreased to -1.5% after a reading of -0.1% in the fourth quarter. The Bureau of Economic Analysis (BEA) threw everything but the kitchen sink in the explanation: personal consumption expenditure (PCE), slower exports, low nonresidential fixed investment, slow state and local government spending, a deceleration in residential fixed investment. An upturn in federal spending kept it from being worse.

A recent Wall Street Journal poll of economists put GDP for all of 2015 sliding down to 2.2% growth from a 2.7% prior target. Freddie Mac recently revised down its forecast for economic growth in 2015 to 2.3% from 2.6%. What if economic numbers remain weak in the second half?

With the reminder that U.S. GDP is said to be 70% or so tied to consumer spending, the translation of continued weak retail spending just does not bode well for the underlying growth of the economy. Blame weather, blame port strikes, blame the desire to save and blame whatever else you want, but ultimately enough factors make for an underlying problem.

2. Strong Dollar: Is It Enemy Number One?

A rising U.S. dollar against the yen, euro and other currencies has been a serious issue during first-quarter earnings and even in the end of 2014. The euro went from $1.37 in the past 52-weeks down to about $1.04, before finally recovering back above $1.10. What is key is that American goods suddenly cost 20% to 30% more. While this has abated as of April and May, rising interest rates would theoretically make for a stronger dollar again.

At issue is that deposits simply chase higher relative interest rates, particularly if it is one of the reserve currencies. If the Fed raises rates too far too fast, then they just make U.S. companies that much less competitive again — and that drives all the economic numbers south, a symbiotic relationship that is just hard to avoid. If the euro and dollar reach parity, the biggest U.S. multinational companies will be hurting. As a reminder, the euro was at $1.18 on its formal launch.

If the Fed takes interest rates up too fast, the flood of foreign currencies being converted to buy dollars could just send our multinational corporate giants into further uncompetitive positions. Visiting Paris or Tokyo may now be cheaper than it has been in years, but that doesn’t exactly drive the U.S. economy, and most likely it doesn’t come into Janet Yellen’s. 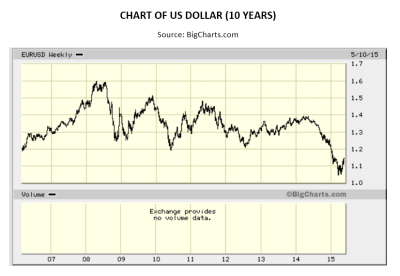