6. Does the Fed Want to Punish Japan and Europe QE?

24/7 Wall St. will leave it up to you to decide whether there is “a global fix in place” when it comes to world’s central banks and monetary policy. Still, the G10 and G20 are international forums for the governments and central bank governors from the world’s major economies, and they routinely meet regarding the global economy.

While everyone was in a race to devalue their currencies after the recession, it would now seem to be counter-productive in a global economy for the top central bank in the world (the United States) to be the only major country wanting to raise rates too fast when quantitative easing (QE) and a negative interest rate policy is still early in Europe. While Greece keeps coming up as an issue in Europe, that tiny nation has become predictably untrustworthy by Western standards and is perhaps just a sideshow in comparison to the big picture, to the point that it doesn’t deserve further mention.

Japan keeps trying to inflate its economy under Abenomics, and the nation may just keep going with this policy until it no longer can. China’s growth trend has been slow enough of late that its huge growth numbers feel like a recession to most advanced economies. Japan keeps going under Abenomics, but the fundamental issues of an aging population with low growth rates only make the issues around a slow global economy that much more challenging.

ALSO READ: Countries That Hate America the Most

China has now effectively eased up on rates to spur growth, despite mixed regulatory threats from time to time. The reality is that China’s currency is mostly pegged to the U.S. dollar, despite a widening out of trading bands in recent years. If the United States drives up its own dollar, then it effectively drives up the value of the renminbi. That just makes the rest of the world view China as being that much more expensive, and they will take their business elsewhere. For that matter, China has already moved some of its operations elsewhere too.

The one issue that has been working well for the Federal Reserve is that the official unemployment figures have been in a downward trend since 2010. One issue to consider here is that the Federal Reserve keeps lowering its benchmark for what the real target is on unemployment, which was last seen at only 5.4% for April of 2015. There is a flip side here though, and that is that the labor force participation rate remains dismal and well under 63% (see below) and the underemployed rate remains above 10%. Nonfarm payrolls rose by 223,000 in April, but the preliminary gain of 126,000 in March was revised to a meager 85,000.

Perhaps the real issue with the Fed and the employment situation is that this remains the weakest post-war recovery of most of our lifetimes. The official unemployment rate of 5.4% is still actually a full 1.0% higher than the economic peaks of 2006 and 2007. Many large employers still claim endlessly that they cannot find workers with enough skills. The so-called U-6 (the total unemployed, plus those marginally attached to the labor force, plus total employed part time for economic reasons, as a percentage of the civilian labor force plus all persons marginally attached to the labor force) is still above 10%.April was shown to be 10.4% not seasonally adjusted and 10.8% seasonally adjusted. 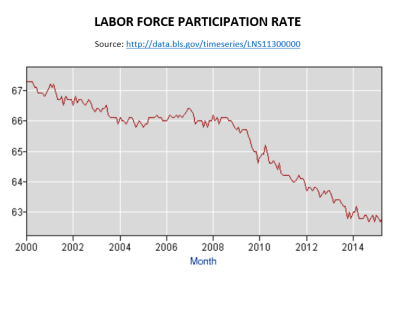 ALSO READ: The 10 Most Popular Stores in America