These record-breaking auctions took place via absentee bidding and on-site bidding at the National Sports Collectors Convention held in Chicago. One force that likely drove up the price here, on top of the quality of the two cards, is that the card grading company matters on the realized prices. To collectors it usually matters if there is a PSA grade (1-10) from Collectors Universe Inc. (NASDAQ: CLCT), a BVG grading (1-10) from Beckett, or an SGC grade (10-100 and 1-10) from Sportscard Guaranty. And for ungraded cards of this magnitude, buyers and collectors simply will not pay up like this due to risks of fakes or alterations.

To demonstrate that some collectors value one grading company’s grade much more than others, a 1952 Topps Mantle with BVG grading under Beckett as “8” sold for $81,348.40 back in 2013. The auction house Mile High had a SGC sample graded “86” sell for $62,417.90 in 2014. Here are some other auction results in high-end PSA graded cards of the 1952 Topps Mickey Mantle card, sourced by each auction house and by VintageCardPrices.com (amounts do not include buyer premium and do not exclude auction fees):

Auction prices are fairly easy to track. There are only a dozen or so real sources for pricing in auctions of this caliber. There can be off-the-record sales of other extremely rare graded cards that take place, but this sale marks the official highest sale price ever paid for any graded 1952 Topps Mickey Mantle card.

Here is where the numbers get really hard to fathom. Kids buying bubblegum cards back in 1952 at convenience stores, grocery stores and department stores paid a mere five cents per pack. Another industry insider anomaly here is that technically the 1952 Topps Mantle is not really the “real rookie card” for Mickey Mantle. The true rookie card title belongs to the 1951 Bowman Mickey Mantle, and there are a slightly higher number of PSA graded samples of that card.

Most of the Mantle cards from that 1952 Topps set that still exist today were not sold in large quantities all around the country due to the so-called high-number card releases taking place later in the year and often not to as many sales outlets. Some Mantle and 1952 Topps cards were salvaged rather than destroyed with vast numbers of the 1952 Topps cards at the end of the year. Ken Goldin, founder of Goldin Auctions, gave us an emailed statement on the pricing of this auction ahead of the final auction results. He said:

This is currently the highest priced Mickey Mantle card publicly sold, any card, any grade. We are thrilled that everyone finds this card as special as we do. A well centered, perfect color 1952 Topps Mantle is a true rarity.

ALSO READ: The 10 Jobs With the Best Job Security

Sales of this magnitude stand out to collectors and investors alike. This may also raise the bar for other high-end graded cards that are deemed the most desired cards to vintage collectors. The images below show both 1952 Topps Mantle cards, and any color variations are likely due to website images versus real life images. 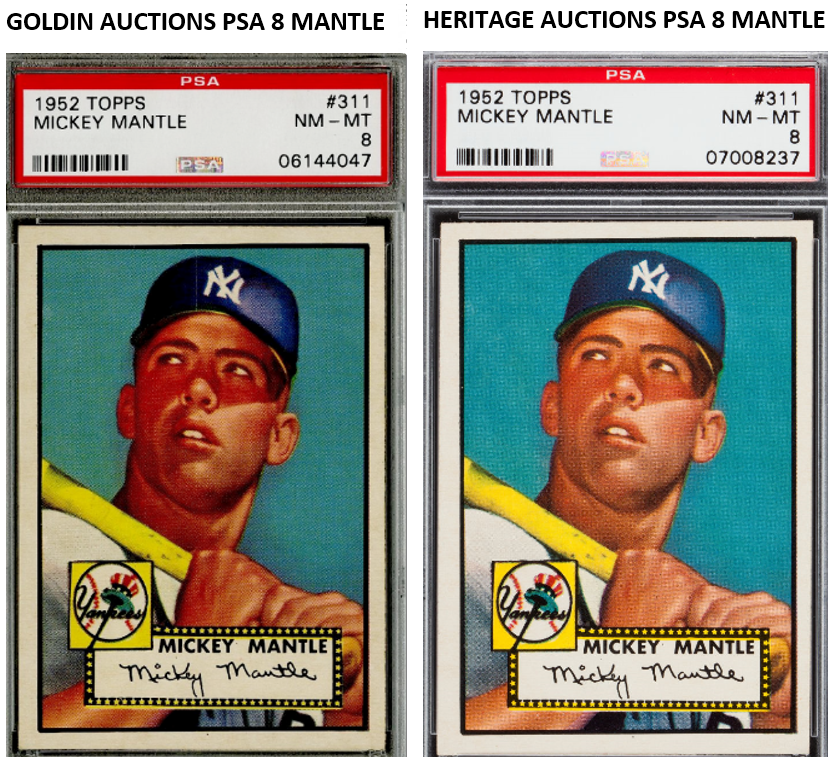