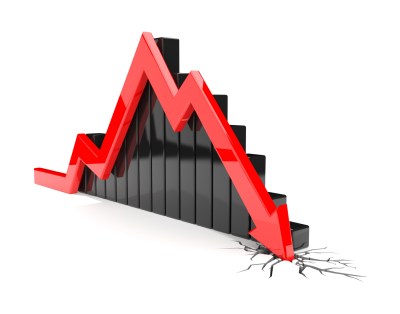 Barclays PLC (NYSE: BCS) fell by about 24% on Monday to post a new 52-week low of $6.76 against a high of $18.05. The stock closed at $8.89 on Friday night. Volume reached around 140 million shares,about 28 times the stock’s daily average of around 5.3 million. The big bank took another big hit after dropping 27% last Friday. Barclays depends on its London investment banking unit to a large degree, and no one is sure what will happen to the City’s banks.

Lloyds Banking Group plc (NYSE: LYG) dropped about 18% on Monday to post a new 52-week low of $2.73 against a 52-week high of $5.54. Volume reached more than 7 times the daily average of around 4.2 million. The stock closed at $3.33 on Friday night. Another British bank that got clobbered on the Brexit outcome.

Delta Air Lines Co. (NYSE: DAL) posted a new 52-week low on Monday. Shares traded at a low of $32.60, down about 7.3%, after closing at $35.18 on Friday. The stock’s 52-week high is $52.77. Volume was more than double the daily average of around 10.5 million shares. Uncertainty is the controlling force in the airline industry again Monday as investors try to figure out what Brexit means.