7) The Actual U.S. Dollars in Circulation is Going Parabolic

Many economists, investors and business owners have been surprised that inflation has not ever kicked into overdrive. Back in the pre-credit/debit card days, all eyes were on the actual supply of currency in circulation. Raw cash, that is! This chart from the St. Louis Fed’s Currency in Circulation shows a steady increase over time, but the rapid inflow of cash has blown through the prior rocket moves in raw dollars even though it may not be that way on a percentage basis.

There was a 15% injection in cash in roughly the last 90 days of 1999, but that then came down. In the Great Recession, there was a 8% gain in currency from the start of October 200 through the end of March 2009 and it kept rising over time.

It’s no great shock that consumers curb (or slash) spending at the start of and through a recession. What is not expected to happen is a surge in personal income, and perhaps not a gain in savings either. April was the first month that almost everyone was on lock-down for an entire calendar month, and it was the first month that businesses were shut down all month and where furloughs were vaulted into layoffs.

The Commerce Department reported on Friday that consumer spending did plummet in April, but there was enough extra stimulus and the unemployment benefits were big enough that the grand total created a massive surge of more than 10% in personal income.

Wages and salaries showed a -8% move, and the Commerce Department confirmed it was unemployment checks and extra benefits ($1200 checks) that added the biggest gains. Joe Public was frugal and smart as the personal saving was $6.15 trillion (annualized) in April and the personal saving rate savings as a percentage of disposable personal income was an unprecedented 33%. That money will help buffer the coming drop in GDP. 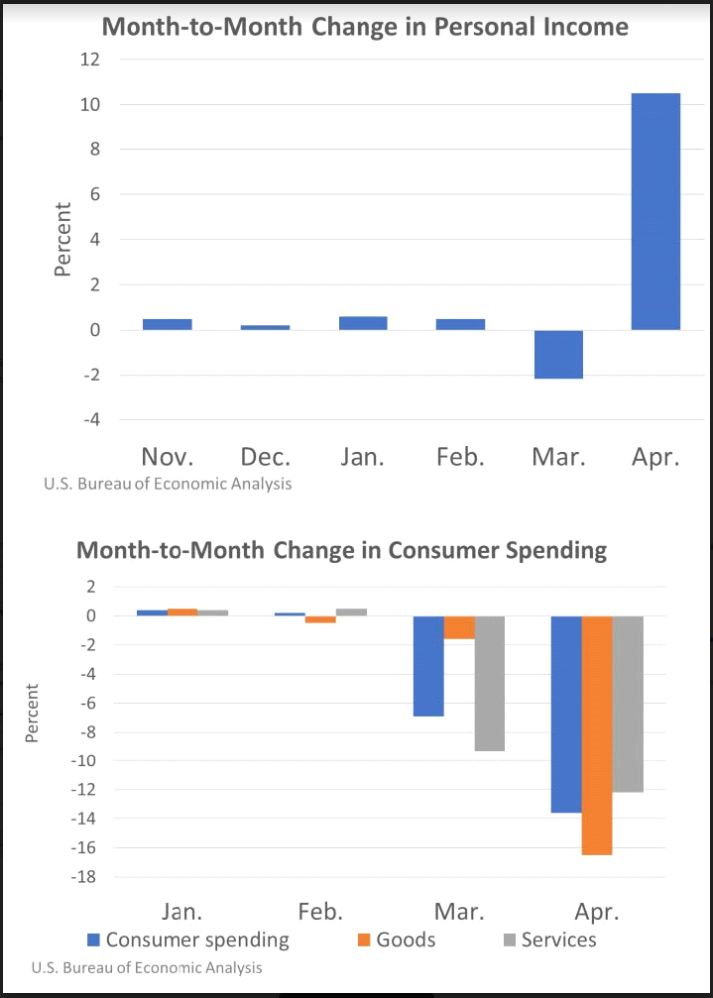