June is nearing its end and the stock market’s recovery along with the overall economic reports have been nearly unimaginable. Employers, investors, day traders, economists and those who are looking at financial opportunities must consider what the movement in the stock market and other financial markets are trying to signal about the economy ahead. Current events and future events are unfolding and there are many charts and graphics that are trying to offer some insight into what is coming down the road.

Sometimes the best way to look at a market and other indexes is to look at charts and graphs. 24/7 Wall St. has created a weekly review of some of the best charts, tables, graphics and other images that should be given deep consideration for the coming days (or longer) based on those readings. And without trying to sound too forceful, anyone who has their assets in stocks, bonds or other asset classes better have an understanding of what the markets are trying to signal.

Even before the economic numbers started to improve to a “less bad” situation, the stock market and interest rates are signaling that things are not going to be as bad in the coming months versus what was seen in prior months. That could be derailed if the rapid rise in COVID-19 cases keeps surging, but government leaders have thus far indicated that another full economic shutdown should not be expected.

For the week that ended on June 19, there are some critical levels that need to be given strong consideration for the week of June 22 to June 26. And it is important to grasp that the election is now nearing five months away.

The stock market may have sold off on Friday, but the indexes have recovered the bulk of their losses after the panic selling ended in March. Trillions of dollars in stimulus money have been thrown at the economy, and the Federal Reserve has issued a proclamation that short-term interest rates are going to remain low until the economy is back on its way to full employment.

We have first covered the S&P 500, a look at the Invesco QQQ Trust (NASDAQ: QQQ), Gold, Apple Inc. (NASDAQ: AAPL), The Kraft Heinz Company (NASDAQ: KHC), and Crude Oil. We have also given a look at the wild explosive move higher in Urban One, inc. (NASDAQ: UONE) that has been seen in recent days. A special note was also provided around the COVID-19 cases, with the rising cases and current decline in number of deaths.

A brief commentary has been provided on each chart and graphic, as has the source of each item featured. These are not meant to be ranked in any particular order as some charts will be more important to some people than they are to other people.

The S&P 500 Warning: Must Have Reasons for Longs & Shorts Alike

A new fresh chart for the S&P 500 in the week ahead offers some good takes here. As the S&P reached 1% or so over the 3,200 handles then the gap down from February after the highs that led into the March panic selling came directly into play.

So here is your chart from Scott Redler on Twitter for his T3 trading service, and don’t ignore this warning the guy has because he has a great record of success — today’s candles (candlesticks) might make the market technically vulnerable so have a hedge on and make sure you have a reason for anything you have on either long or short. That is always good advice, but at critical levels in the market it is key.

Apple Inc. (NASDAQ: AAPL) has been the comeback kid more times than anyone can reasonably count. As the shares rise, analysts chase it with higher and loftier price targets. As the shares correct, the analysts lower their targets and get cautious just in time for the stock reverse and rip higher. The stock hit an all-time above $350 recently, but there is starting to be some serious resistance there with 5 different trading days in the last two weeks failing to hold. With more than a 50% rally since March’s panic selling lows that may not be surprising along with its $1.5 trillion market cap.

Apple announced selective re-closures of stores due to local COVID-19 spikes and that signals it will not hesitate to close more stores if Cook & Co. deem it appropriate. Apple also has its WWDC this coming week and that means the expected roll-out and preview of the upcoming 5G iPhone 12 in time for the holiday season this year (that is the hope anyhow). Oh, and Apple is expected to go anti-Intel chipsets after 2020 in favor of its own. The moral of the story in Apple is that chasing it can be painful for a while, but any serious pullbacks have proven over and over that when everyone is negative the best trade was always to “hold your nose, click the “Buy” button on the screen, and not to look at it for a month or two. 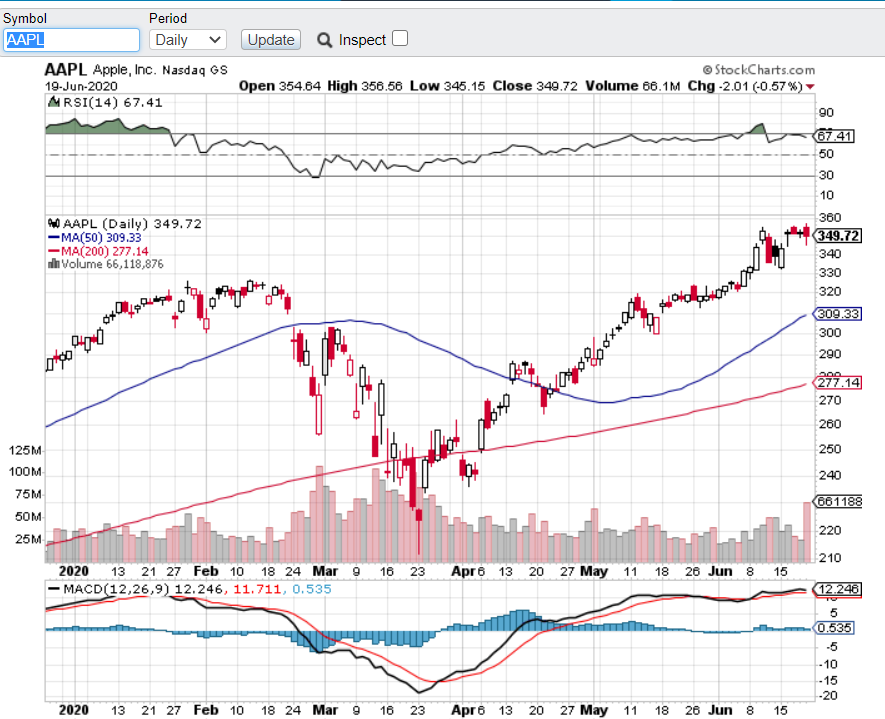 Additional charts and explanations continue on Page 2 and Page 3.