The number of U.S. chief executive officers who lost or left their jobs in June fell by 13% compared to the May total. Last month, 99 CEOs left their jobs, compared to 114 who left in May. CEO turnover has increased by 15% from 631 last year to 726 in the first half of 2019.

Outplacement firm Challenger, Gray & Christmas reported the data on Wednesday. In the second quarter of this year, 310 CEOs left their positions, 25% fewer than 416 departures in the first quarter and 7% higher than the 290 changes in the second quarter of last year. The second-quarter total is the highest since 2011, when 319 CEOs left their jobs.

Vice President Andrew Challenger of Challenger, Gray & Christmas said, “Companies are potentially preparing for a contraction in the market and installing leadership who can weather a storm. We’re also seeing a complicated landscape due to tariffs, deregulation, skills shortages, and technological advances, all impacting how companies do business and plan for the future.”

Of the CEOs who left in June, 30 stepped down, 23 retired and nine took new positions with another company. Four took another position with the same company. Challenger noted that no CEO left due to sexual or professional misconduct allegations. Two CEOs were involuntarily terminated last month.

The government/nonprofit sector saw 21 CEO changes in June, bringing the six-month total to 162, the most of any Challenger category and a 37% year-over-year increase. Financial sector CEO departures in the first six months of 2019 increased by six in June to 64, and the number of tech industry CEOs who have departed this year has risen by five to 83 this year. Health care industry CEO departures total 70 for the year to date and are 6% higher than in the first six months of last year.

Some prominent CEOs make more than 1,000 times what their employees make. See who some of the highest paid CEOs in America are.

The following chart from Challenger’s April report shows CEO departures by month from January 2010 to April 2019. 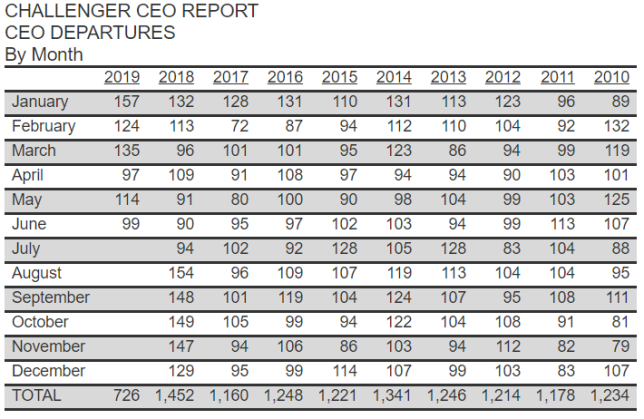