US CEOs Are Departing at a Record Pace, Tech Slammed

The number of U.S. chief executive officers who lost or left their jobs in September dipped by 5% compared to the August total. Last month, 151 CEOs left their jobs, compared to 159 who left in August. Year over year, CEO turnover increased by 13% from 1,027 last year to 1,160 in the first nine months of 2019. The year-to-date total is the highest since 2002, when outplacement firm Challenger, Gray & Christmas began tracking CEO departures.

The September total was 2% higher than the total of 148 CEOs who left their jobs in September of 2018 and was the eighth month so far in 2019 when year-over-year departures were higher.

Vice President Andrew Challenger said, “Coming off a decade-long expansion, companies that started and developed during this period find themselves needing new leadership to continue to grow. Other factors are contributing to a high number of leadership changes as well. Companies that have done well are implementing succession plans that have long been in place. Others are finding that regulatory uncertainty and new technologies changing how companies do business require leaders who can specifically address these issues.”

Challenger noted in that regard that e-cigarette maker Juul replaced its CEO with “a tobacco executive to combat the growing backlash against its product, including marketing practices allegedly aimed at children.”

Last week, Challenger reported that job cuts through September were nearly 28% higher than in the same period last year and the highest total for the period since 2015.

Of the CEOs who left in September, 54 stepped down, 25 retired and 10 took new positions with another company. Challenger noted that no CEO left due to allegations of professional or sexual misconduct. Two CEOs were involuntarily terminated last month.

The government/nonprofit sector saw 28 CEO changes in September, bringing the nine-month total to 246, the most of any Challenger category and a 21% year-over-year increase. Pharmaceuticals sector CEO departures in the first eight months of 2019 increased by three in September to 45, which was also up from 27 at the same point last year. The number of tech industry CEOs who have departed this year has risen by 46 to 154. Health care industry CEO departures totaled 93 for the year to date, slightly lower than the 96 in the first nine months of last year.

These are CEOs who need to be pushed out this year.

The following chart from Challenger’s October report shows CEO departures by month from January 2010 to September 2019. 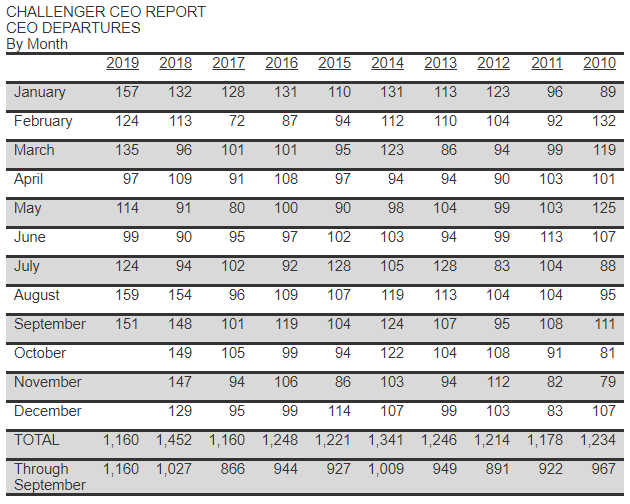