The number of U.S. chief executive officers who lost or left their jobs in August jumped by 28% compared to the July total. Last month 159 CEOs left their jobs, compared to 124 who left in July. Year over year, CEO turnover increased by 15% from 879 to 1,009 in the first eight months of 2019. The year-to-date total marks the highest since 2002 when outplacement firm Challenger, Gray & Christmas began tracking CEO departures. The 159 monthly total is also the highest one-month total since the firm began its tracking.

The July total was 3% higher than the 154 CEOs who left their jobs in August of 2018 and was the seventh month so far in 2019 when year-over-year departures were higher.

With growing uncertainty surrounding global business and market strength, the fact that so many companies are choosing this moment to find new leadership is no coincidence. That said, the high-level skill sets of many CEOs are in high demand right now, and the tight labor market and skills shortage may have many boards attempting to poach sitting leaders.

Last week, the firm reported that job cuts through August were 36% higher than in the same period last year and the highest total for the period since 2015.

Of the CEOs who left in August, 54 stepped down, 35 retired and 15 took new positions with another company. Challenger noted that one CEO left due to allegations of professional misconduct. Four CEOs were involuntarily terminated last month.

The government/nonprofit sector saw 30 CEO changes again in August, bringing the eight-month total to 218, the most of any Challenger category and a 28% year-over-year increase. Pharmaceuticals sector CEO departures in the first eight months of 2019 increased by four in August to 42, up from 25 at the same point last year, and the number of tech industry CEOs who have departed this year has risen by 35 to 134 so far this year. Health Care industry CEO departures total 83 for the year to date and slightly lower than in the first eight months of last year.

The following chart from Challenger’s September report shows CEO departures by month from January 2010 to August 2019. 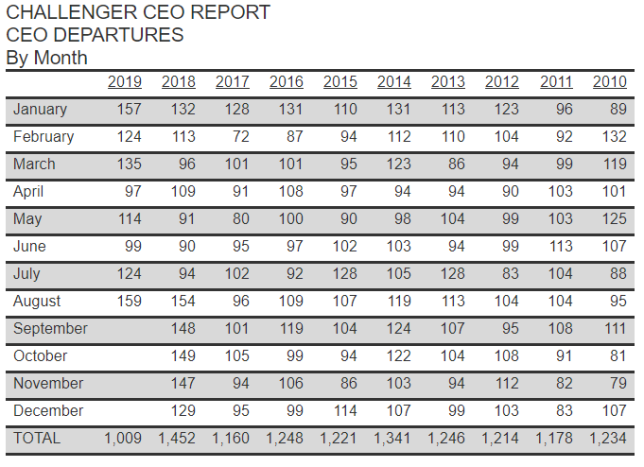 24/7 Wall St.
50 of the Most Popular Words That Entered the Dictionary in the Last Decade
Subscribe to Our Newsletter
Read more: Jobs, Corporate Governance