The Death of College

Source: Thinkstock
The reputation of college has fallen on hard times. A four-year education can cost $100,000 and leave graduates with burdensome loans. Many college graduates have found that, even with advanced degrees, they cannot find advanced jobs that might allow them to pay their student loans. The problem has become worse since the start of the recession. Over the past decade, online education has gained sharply in popularity. In many ways, it is now viewed as equal to or better than a traditional education.

According to a new Gallup survey:

Still something of a novelty, online education is seen relatively positively by Americans for giving students a wide range of curricula options and for providing good value for the money. However, Americans tend to think it provides less rigorous testing and grading, less qualified instructors, and has less credence with employers compared with traditional, classroom-based education.

One of the things “novel” but profitable businesses do is erase their weaknesses to make themselves competitive. That means online education firms are certain to improve their grading structures and add more well-respected faculty, which in turn should make those who take courses more attractive to employers.

A series of upgrades in online education is well underway. Part of this process is because major universities have begun online programs. Harvard Business School, the premier education institution in its discipline, has just launched its first online course. It is one of an army of traditional colleges and graduate schools to do so.

The organizations with the greatest incentive to improve their images and operations are the public corporations in the industry. First among these are Apollo Group Inc. (NASDAQ: APOL), DeVry Inc. (NYSE: DV), Education Management Corp. (NASDAQ: EDMC) and the Kaplan division of what is left of the Washington Post Co. (NYSE: WPO). These companies have been in a battle with the Education Department over student debt practices. However, they are part of the way through a process that could mean a resolution of the fight.

One of the conclusions Gallup drew from its research is that:

Online courses and degrees offer immense potential for increasing college access, decreasing the cost of education, and providing expanded options for learning. Still, overcoming the public’s views on technology could be difficult. For instance, despite lots of media and industry buzz about the personalized nature of online instruction, Americans still view traditional, classroom-based education as better tailored to each individual.

Although online education is in relatively nascent stages of development and acceptance, many Americans already see benefits in the lower cost and diverse coursework it offers. That is powerful. But if leaders in the field want online learning to have equal status with campus-based programs, they need to do more to demonstrate high standards for instruction, testing, and grading. With this, greater public appreciation for the benefits of online learning, and greater employer acceptance of online educational qualifications, will likely follow.

If so, the threat to traditional higher education venues is extreme. 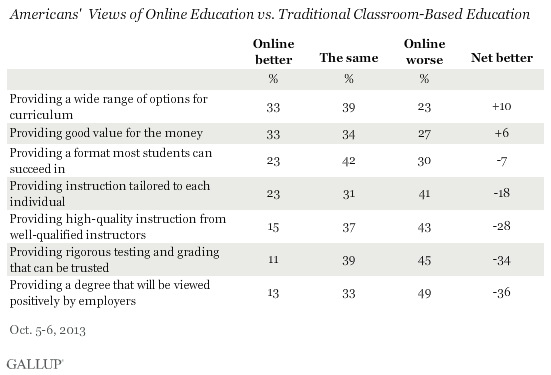 Methodology: Results from the Oct. 3 to 6, 2013, Gallup poll are based on telephone interviews with a random sample of 1,028 adults, aged 18 and older, living in all 50 U.S. states and the District of Columbia. For results based on the total sample of national adults, one can say with 95% confidence that the margin of error is ±4 percentage points.