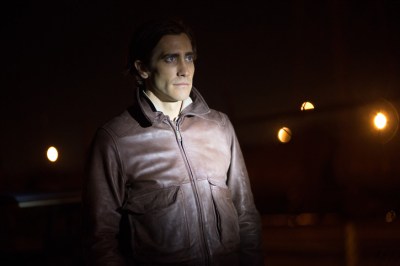 Source: Open Road Films
The major movie studios do not relish competing with a Halloween Friday and all the trick-or-treating and holiday parties. Only one studio is releasing a movie this weekend, and it is a curtain call for a horror movie that first hit theaters 10 years ago.

Lions Gate Entertainment Corp. (NYSE: LGF) is re-releasing the original film in the horror franchise “Saw.” It’s one of only three movies in wide release this weekend, opening on 2,063 screens. The film grossed more than $100 million on a production budget of just $1.2 million back in 2004 and is expected to take in receipts of $5.2 million this weekend.

The movie that is touted to be the box-office leader this time around is “Nightcrawler,” starring Jake Gyllenhaal in a film that is neither a horror film nor about worms. The film, from Open Road Films, opens on 2,766 screens and Box Office Mojo predicts receipts of $15 million to lead the weekend’s new and current films.

The other new release this weekend is a thriller from independent Clarius Entertainment, “Before I Go To Sleep” starring Nicole Kidman, Colin Firth and Mark Strong. The movie opens on 1,902 screens and is projected to garner just $3.5 million at the box office.

Trailing “Nightcrawler” in the weekend box office sweepstakes are “John Wick,” “Fury,” “Ouija” and “Gone Girl.” Lions Gate’s “John Wick” opened last weekend with a gross of $14.4 million, trailing “Ouija” with $19.9 million from Comcast Corp.’s (NASDAQ: CMCSA) Universal studios. “Fury” from Sony Corp. (NYSE: SNE) and Columbia hauled in $13.4 million last weekend and is projected to add $8 million to that total this weekend. And Sony/Columbia’s “Gone Girl,” which has already had receipts of $124 million, is expected to post $7 million ticket sales.

Thus far in the fall season, which runs from the day after Labor Day through the Thursday before the first Friday in November, “Gone Girl” is the top domestic grossing film, with a total of $127 million, followed by Twenty-First Century Fox Inc.’s (NASDAQ: FOXA) “The Maze Runner,” with about $95 million in gross receipts, and Sony’s “The Equalizer,” with $94.5 million.

ALSO READ: The 10 States With the Best Quality of Life