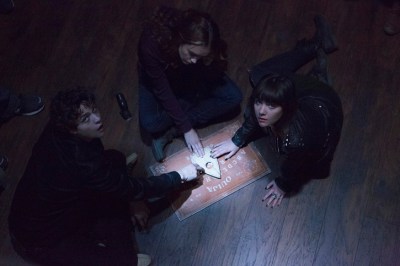 Source: Comcast Corp. / Universal Pictures
Only one horror movie is due for wide release the weekend before Halloween. “Ouija” uses the well-known board as a conjurer of evil, and its PG-13 rating is likely to attract the weekend’s largest audience. The film, from Comcast Corp.’s (NASDAQ: CMCSA) Universal Studios, is opening on 2,858 screens and Box Office Mojo sees (ahem) gross receipts of $22 million.

Last week’s box office winner, “Fury” starring Brad Pitt, opened with $23.7 million, well below a pre-release prediction of $33 million. Not a lost weekend for Sony Corp. (NYSE: SNE) and Columbia, but well below the openings for “Gone Girl” ($37.5 million) and “The Equalizer” ($34.1 million) from Twenty-First Century Fox Inc. (NASDAQ: FOXA) and Columbia, respectively. “Gone Girl” has posted gross receipts of $111.5 million domestically and $101.8 million internationally, while “The Equalizer” has claimed $90.6 million in the United States and $69.6 internationally.

The other film opening in wide release this week is “John Wick,” starring Keanu Reeves, which is hitting 2,589 screens. The movie from Lions Gate Entertainment Corp. (NYSE: LGF) is Reeves’s first action movie since he starred in “The Matrix” trilogy. The film is touted to finish fourth in the weekend sweepstakes, with gross ticket sales of $12.5 million, behind both “Fury” with a projected a take of $14.9 million and “Gone Girl” with predicted receipts of $13.0 million.

The third movie opening on at least 600 screens this weekend is “23 Blast” from independent distributor Ocean Avenue Entertainment. Based on a true story about a blind high-school football player, the film is expected to post about $1 million in receipts for the weekend.

Thus far in the fall season, which runs from the day after Labor Day through the Thursday before the first Friday in November, “Gone Girl” is the top domestic grossing film, followed by Fox’s “The Maze Runner” with about $86 million in gross receipts and Sony’s “The Equalizer.”