Movie Fans Get 'Dumb and Dumber To' This Weekend 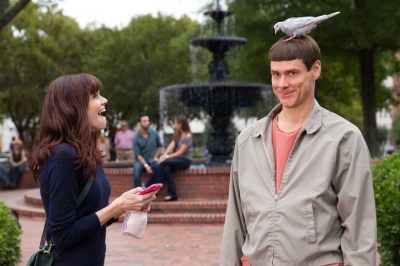 Source: Comcast Corp./Universal Studios
The tally on last week’s box office receipts did not end up with the projected winner at the top of the ranking. Viacom Inc.’s (NASDAQ: VIAB) Paramount studio was supposed to have last week’s winner with “Interstellar,” but Walt Disney Co.’s (NYSE: DIS) Buena Vista studio pulled an upset with its animated feature “Big Hero 6.”

While “Big Hero 6,” which earned $56.2 million last weekend, is expected to lead the box office sweepstakes again this week with $33 million in receipts, “Dumb and Dumber To” from Comcast Corp.’s (NASDAQ: CMCSA) Universal Studio is expected to gross $29 million to nab second place on its opening weekend on 3,153 screens. “Interstellar” is tabbed to pick up $27.5 million to add to its opening weekend total of $47.5 million.

Both “Big Hero 6” and “Interstellar” fell a little short of opening weekend projections from Box Office Mojo, which had the Disney feature at $60 million and the space adventure at $58 million.

The only other film opening in wide release this weekend is “Beyond the Lights” from independent Relativity Media, which will be showing on 1,789 screens. The film about a pop star who becomes romantically involved with a policeman is expected to open with about $11 million in ticket sales.

The other film to get some attention this weekend is Jon Stewart’s “Rosewater,” the film he shot last year while taking a break from his day job as host of Comedy Central’s “The Daily Show.” The new film opens on 371 screens.

The big movie of the month is slated to open next Tuesday, when “The Hunger Games: Mockingjay, Part 1” from Lions Gate Entertainment Corp. (NYSE: LGF) opens on more than 4,000 screens. This movie is expected to be 2014’s domestic box office champ, given that the first two installments of the four-movie set have grossed $408.0 million and $424.7 million. Like the Harry Potter and Twilight films, the final book in the trilogy has been split into two movies, and that should cut its total gross to no more than $400 million, with Box Office Mojo predicting a total of $385 million.

This Is the Best Revenge Movie of All Time