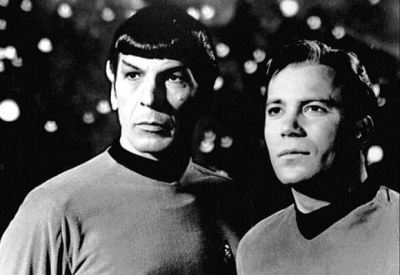 Source: Wikimedia Commons
Leonard Nimoy and his “Star Trek” co-stars built a remarkable movie franchise that brought in over $1.2 billion, or $103 million per picture spread over 12 films. He died Friday at age 83. Nimoy’s role as Mr. Spock will be remembered for years. In Hollywood, he will also be remembered as key to one of the most successful movie franchises ever.

Although the movie version of “Star Trek” had at least three crews over time, Spock’s crew enhanced the popularity of the TV series aired in the mid-60s, which had a wildly cult-like following of its own. The first movie, “Star Trek: The Motion Picture,” released in 1979, was among the most successful of the franchise. It raked in over $82 million, although it ran in only 1,022 theaters, according to Box Office Mojo. Most of the rest of the franchise installments ran in more than 2,000 theaters. Some of them ran in over 3,000 locations. The original Spock even had a minor role in the most successful installment of the franchise, “Star Trek,” released in 2009. It brought in $257 million, across 4,053 theaters.

Nimoy directed two of the “Star Trek” movies and also directed the 1987 film “Three Men and a Baby,” which grossed $167.8 million for Walt Disney Co.’s (NYSE: DIS) Buena Vista Pictures. Not bad for a film with an $11 million production budget. Interestingly, the Nimoy-directed comedy sold more tickets than all but the top two grossing “Star Trek” movies. In all, the actor/director got credit for 12 directorial efforts.

The TV program that put the franchise on the map ran from 1966 to 1969 on CBS Corp. (NYSE: CBS). Those 80 episodes preceded the first movie by 10 years. It took that long for the series and its characters to seep into the national consciousness. Once there, however, it never left.

Much of the credit has to go to Nimoy, whose character got to say lines like, “Insufficient facts always invite danger” and, of course, Spock’s epigram, “Live long and prosper.” Nimoy inhabited Mr. Spock rather than the other way round. Here is President Obama’s statement on Nimoy’s passing:

Long before being nerdy was cool, there was Leonard Nimoy. Leonard was a lifelong lover of the arts and humanities, a supporter of the sciences, generous with his talent and his time. And of course, Leonard was Spock. Cool, logical, big-eared and level-headed, the center of Star Trek’s optimistic, inclusive vision of humanity’s future.

ALSO READ: The Bullish and Bearish Case for Walt Disney in 2015