The stock traded at around $22 a share in late November of 2010 and would tumble below $8 a share before beginning a recovery that has lifted the share price to $500 as of Monday’s open.

Since 2010, Netflix has raised the service’s price five times, roughly once every two years. In October, the company said it would raise the standard streaming package price by $1.00 a month, from $13 to $14 (the premium package is increasing by $2). In a recent email to customers, Netflix said that the “[price] update will allow us to deliver even more value for your membership — with stories that lift you up, move you or simply make your day a little better.”

At the end of the third quarter, Netflix reported it had 195 million subscribers worldwide. Globally, no other service even comes close to the company’s dominance, as this map from app developer JustWatch shows. 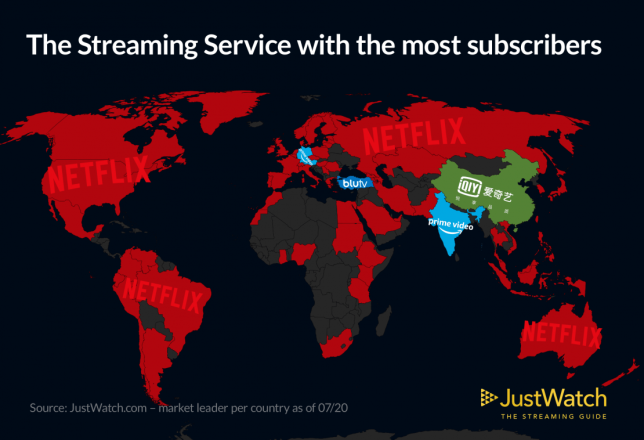 Netflix’s price hike adds about $2.3 billion annually to its revenue, an increase the company needs to keep acquiring and producing original content. Netflix will spend $13.6 billion this year to acquire new content. Of that total, projected spending on original content adds another $4.5 billion, according to a report at Forbes. Amazon’s projected 2020 spend on content is $7.6 billion, of which $1.3 billion is tabbed for original productions.

Disney is projected to spend some $14.8 billion on content this year (that includes all new Disney production). Of that total, original content spending is projected to reach $1.3 billion. Original content for HBO and HBO Max is expected to cost AT&T’s WarnerMedia subsidiary between $2.4 and $3.9 billion in 2020.

The $14 Netflix basic membership compares with an average movie theater ticket price of around $9.25 in 2020. But not many people are going to movie theaters this year and WarnerMedia has just announced that new movies premiering next year will be released simultaneously in theaters and on HBO Max (known in the industry as “day and date”).

AT&T/WarnerMedia is betting that consumers who have grown accustomed to watching movies at home during the pandemic will continue to do so when the spread of COVID-19 is finally controlled. Netflix is making the same bet.

Netflix has to raise its game to beat back the challenges from Disney and WarnerMedia, and that takes cash. The company is betting that a relatively small increase in membership fees will provide the cash the company needs to provide more new content without cannibalizing its user base. And now’s the time to make that bet.