Drew Brees Is the NFL's Most Well-Liked Player

A recent poll looked at how well-liked the NFL’s skill position players are. That definition includes primarily quarterbacks, halfbacks and receivers. Drew Brees, the aging but still effective quarterback for the New Orleans Saints, finished first. However, the reason for his rank is unclear, which leaves people who look at the data guessing.

The poll was done by research firm Morning Consult. Scores were a net of people who rated players favorably less those who viewed the same player unfavorably. Brees had a net score of 37, followed by Kansas City Chiefs superstar quarterback Patrick Mahomes with a score of 35. The players could not be more different, with the exception of the fact they play the same position.

Brees is 41, one of the NFL’s oldest players. He stands six feet tall, or shorter, which makes him among the shortest quarterbacks in the league. He was the MVP of Super Bowl XLIV, which was played in 2009, a lifetime ago in the NFL. Brees holds the all-time record for passing years at 80,358. With 571 regular season career touchdown passes of 571, he ranks behind only Tom Brady’s 581.

Brees is a perpetual bridesmaid. His team has made it to the playoffs regularly but has only won a single Super Bowl. This year, the Saints won the NFC South with a record of 12 and 4. So, back to the playoffs again.

Brees does stand out as a player who has had very little controversy over his long career in a league where domestic violence and substance abuse surface with great regularity.

Mahomes is the face of the NFL today, a spot he took from Tom Brady, winner of six Super Bowls with the New England Patriots. Brady has led his new team, the Tampa Bay Buccaneers to the playoffs this year. At 43, he is one of the NFL’s oldest players. He has appeared in 299 games, a record among quarterbacks.

Mahomes, at his current pace, may set every all-time passing record in the NFL. However, playing a position where there are often severe or career-ending injuries, he may not even come close. His Chiefs won the AFC South with a record of 14 and 2. The Chiefs are favored to win Super Bowl 55. The team won the championship last year.

Maybe Brees and Mahomes top the list because quarterbacks, in general, did well in the poll. Aaron Rogers of Green Bay, who is also taking his team to the playoffs after topping the league with 48 passing touchdowns this year, had a score of 32 in the poll. Russell Wilson of the Seattle Seahawks ranked fourth with a score of 29.

Brady, a controversial player who sat out four games for cheating and is widely disliked because of the overwhelming success of the New England Patriots, had a score of only 23. He certainly would rather have his six Super Bowl rings than a higher score. 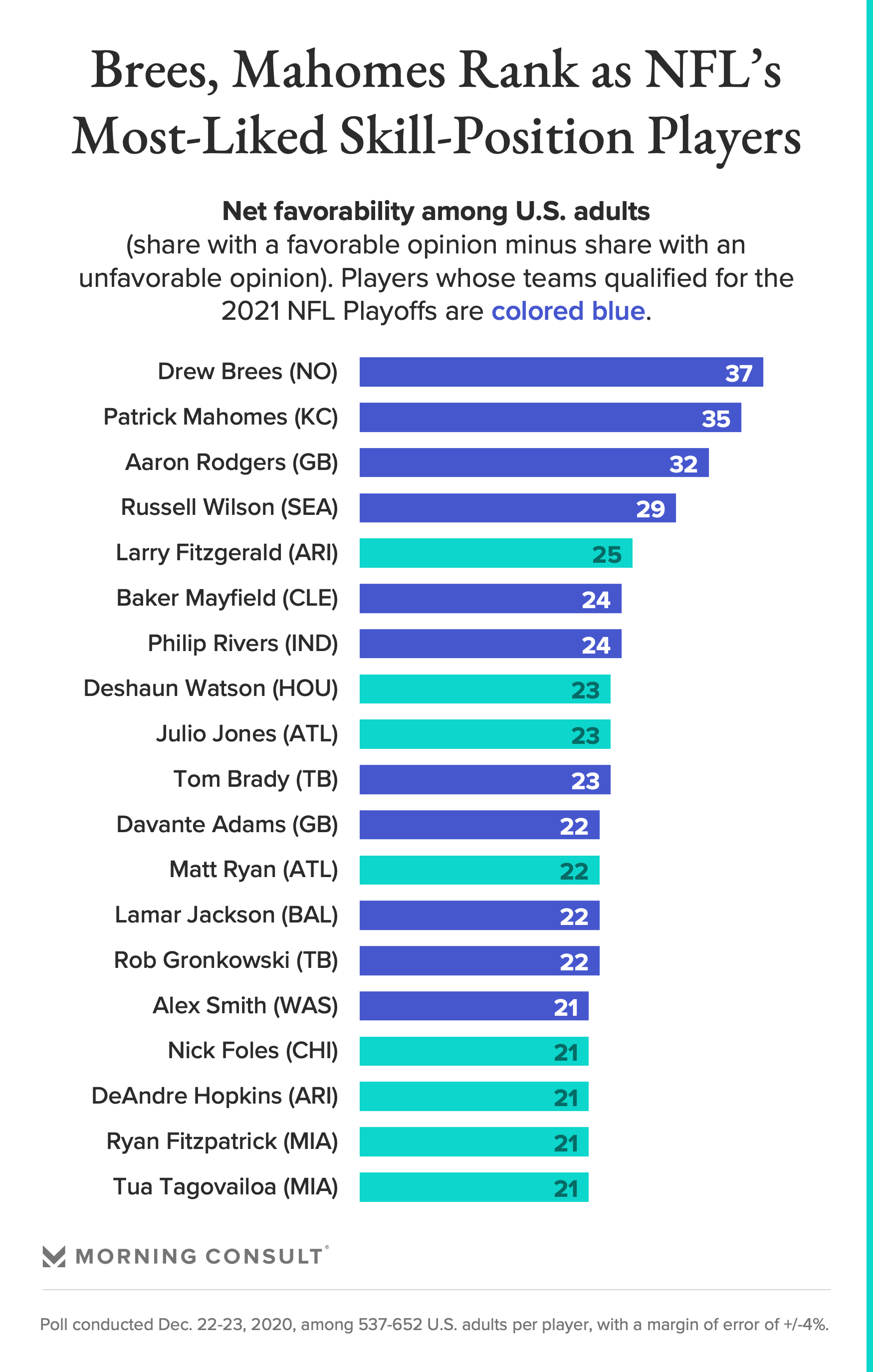