The Most Unhealthy Meals Served By America's Fast Food Chains 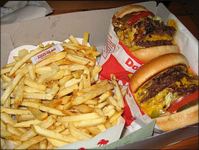 From California, to the New York Island; from the redwood forest, to the Gulf Stream waters, this land is filled with fatties, lard butts and people large enough to have their own gravitational fields.   Yes, America is the land of the “large and in charge” and one of the main reasons for it is our love of fast food.

Though it’s tempting to put all the blame for America’s obesity crisis on the fast-food industry — and experts say they are at least partly at fault — it’s important to view it in context. The industry came of age during the 1950s as suburban communities saw their populations skyrocket and social mores also began changing as women began to increasingly work outside the home.  Some of the savviest entrepreneurs in American corporate history and sprang into action.

McDonald’s Corp. started the trend in 1955 when businessman Ray Kroc wondered how the McDonald Brothers sold so many burgers at their Southern California burger joint.  He opened his first McDonald’s Drive-In in Des Plaines, Illinois.  There are more than 32,000 restaurants that are home to the Golden Arches.  Col.  Harlan Sanders began franchising Kentucky Fried Chicken in 1952.  Five years later, Sanders began selling chicken in buckets and today there are more than 15,000 KFC outlets.  James McLamore and David Edgerton founded Burger King in 1954, when as the company’s website notes “flame-broiled beef begins fulfilling its destiny.”  There are more than 12,500 Burger Kings today.  Glen W. Bell Jr.  opened the first Taco Bell in 1962 with an investment of $4,000 and eventually sold the chain to Pepsico Inc. in 1978.  At that time, there were 868 Taco Bells. Today, there are nearly 6,000.  At the tender age of 17,  Fred DeLuca co-founded Subway Restaurants in 1965. They have 32,800 locations today.

Fast forward to the beginning of the of the 21st Century and many of the same trends that helped create the modern fast food industry are still helping fuel its growth.  Many children, especially racial minorities, live in single-parent households, a whopping 65 percent of non-Hispanic black children and 37 percent of Hispanic children as of 2007, according to Kids Count.  Mothers are working outside the home at much higher rates than in years past.  It is projected that women will account for 46.9 percent of the labor force in 2018, up from 46.8 percent in 2018.  Add to this mix, high unemployment rates caused by the uncertainty of the worldwide economy, and the allure of fast, cheap food becomes hard to resist.

And therein lies the problem.

Obesity rates are a public health crisis.   Obesity rates have tripled among children since 1980.  In 2009, only Colorado and the District of Columbia had a prevalence of obesity less than 20 percent, according to the U.S. Centers for Disease Control and Prevention.  People who are obese are vulnerable to everything from diabetes to heart disease resulting in some $147 billion in direct medical costs annually.

Determining how much fast food is at fault for the poor state of the health of many Americans “is impossible to quantify, but is definitely a factor,” says Christina  Munsell, Research Assistant and at the Rudd Center for Food Policy & Obesity at Yale University, in an interview.  The increase in obesity “definitely would correlate with eating quicker meals that are easier to obtain.”

In order to create the rankings, 24/7 Wall St. examined the menus of the top 10 restaurant brands in the quick service category by sales as determined by QSR, an industry publication, looking for items that were the highest in calories, carbohydrates, sodium and saturated fat.  We then ranked them against the nutritional guidelines of the United States Department of Agriculture.

A couple of important caveats to consider.  Not all food sold at fast food restaurants is unhealthy.  The industry aggressively promotes healthier choice on their menus.  Subway, for one makes a special point of doing this even though its Footlong subs are not healthy choices.  Moreover,  experts point out that some items sold at sit-down restaurants are actually much more unhealthy than many fast food items.  Fast food, though, has gained ground during the economic slowdown while casual and fine dining chains have suffered.  McDonald’s alone earned $24.58 billion in revenue in 2010.  Yum Brands! Inc., parent of KFC, Taco Bell and Pizza Hut, made $11.42 billion.

Methodology:  We derived the rankings by taking the average nutritional ratings of menu items compared with the USDA recommendations.  Carbohydrates, saturated fat, and sodium were given the most weight. Calories and protein were also considered.